An Insider’s Guide to the Mining Sector

An in-depth study of gold and mining shares 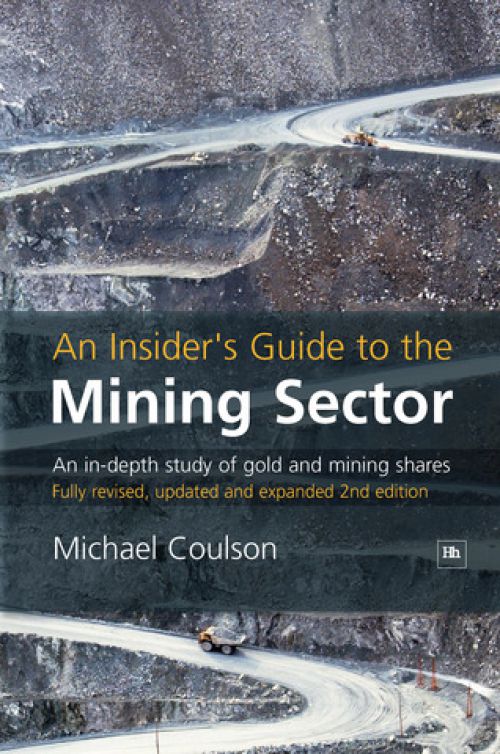 An Insider’s Guide to the Mining Sector

An in-depth study of gold and mining shares

In this fully revised, updated and expanded second edition, Michael Coulson gives a masterly overview of the mining sector. He explains both the rewards and the pitfalls of investing in mining shares, provides a study of the history of mining – focusing particularly on the significant booms and busts – looks at the latest, biggest importers
such as China and India, and argues convincingly that mining should form a core sector for all investors.

The prospect of instant riches gives the mining sector an obvious glamour. And when the mining sector begins to run it can be an awesome sight. But due to the counter-cyclical nature of many mining stocks, they can also offer a valuable refuge when stock markets turn down. An Insider’s Guide to the Mining Sector is aimed at anyone interested in the sector, particularly at those looking at mining as an investment. It covers all of the subjects fundamental to acquiring sufficient knowledge about the mining sector, allowing the reader to invest with confidence.

The book provides a comprehensive and in-depth study of the sector delivering valuable information to industry professionals and potential investors alike.

At Messel and later at Phillips & Drew and Kitcat & Aitken he was regularly in the top 3 gold analysts in the Extel Analysts Survey. After spells at County NatWest, Credit Lyonnais Laing and Nedcor Securities he joined Paribas to head its Global Mining Team. He left Paribas in 2000 following the completion of the merger with BNP. Between 2002 and 2004 he was Chairman of the Association of Mining Analysts and is a non executive director of City Natural Resources High Yield Trust. He is also the author of the 'Insider's Guide to the Mining Sector'.

“Michael Coulson shows a keen insight into mining and his book Insider’s Guide is a must read for both professional and new entrants to the resource sector.”

“An excellent and concise reference book to this fascinating and recently re-discovered sector.”

“The City’s gold guru shows how to play the mining market. Large cap and small cap – it’s all here.”

“It is aimed at analysts or fund managers who may be seriously examining investing in mining shares for the first time and need a thorough grounding in the industry’s fundamentals. In my opinion the book does a good job in this respect.”

“The Insider’s Guide is an excellent road map for new investors who want to know how the mining share market works and an entertaining read for experienced hands who want to keep up to date. Thoroughly recommended.”

All the subjects are covered that are fundamental to acquiring sufficient knowledge about the mining sector to invest in it with confidence.- Monisha Varadan, editor of www.allnewissues.com14th December 2006

“”In this fully revised, updated and expanded second edition, Michael Coulson gives a masterly overview of the mining sector. It covers all of the subjects fundamental to acquiring sufficient knowledge about the mining sector, allowing the reader to invest with confidence. The book provides a comprehensive and in- depth study of the sector delivering valuable… Read more »