Anatomy of the Bear 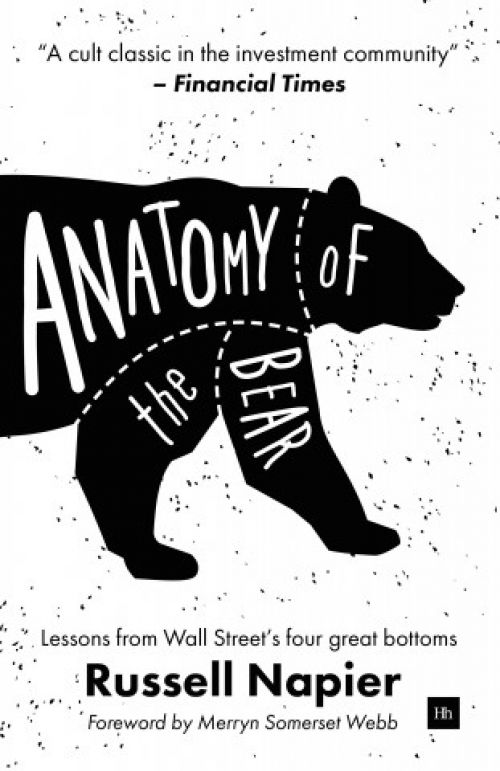 Anatomy of the Bear

How does one spot the bottom of a bear market? What brings a bear to its end?

There are few more important questions to be answered in modern finance. Financial market history is a guide to understanding the future. Looking at the four occasions when US equities were particularly cheap – 1921, 1932, 1949 and 1982 – Russell Napier sets out to answer these questions by analysing every article in the Wall Street Journal from either side of the market bottom.

In the 70,000 articles he examines, one begins to understand the features which indicate that a great buying opportunity is emerging.

By looking at how markets really did work in these bear-market bottoms, rather than theorising how they should work, Napier offers investors a financial field guide to making the best provisions for the future.

This new edition includes a brand new preface from the author and a foreword by Merryn Somerset Webb.

Professor Russell Napier has been an adviser on asset allocation to global investment institutions for over 25 years. He is author of Anatomy of The Bear: Lessons From Wall Street’s Four Great Bottoms and Keeper of the Library of Mistakes, a business and financial history library based in Edinburgh. He has founded and runs a course called A Practical History of Financial Markets and also an online marketplace (ERIC) for the sale of high-quality investment research to institutions. Russell is Chairman of the Mid Wynd International Investment Trust.

“I first read the second book on my list when it was published six or seven years ago and it is one of my favourites on investment. Russell Napier’s Anatomy of the Bear is a must-read for anyone who wants to understand the great sweep of investment history and, in particular, why markets suddenly decide to stop falling and start rising again.”

“an outstanding ‘must-read’ for any student of financial markets”

“Here’s a cushion for when you hit the bottom.”

“this is an outstandingly researched and lucidly written book, and with conclusions that are as important as they are compelling.”

“[amongst] the finest minds in Asian finance”

“[one of the] year’s best investment books”

“Keep this book in mind, for one day it will help you make a lot of money! Russell Napier has written a serious book for serious, patient investors.”

“Napier’s cogent, lucid explanation of the similarities and differences between historic financial declines makes this book an essential addition to the education of serious equity investors.”

“If you want to make serious money you need to invest when others will not. Russell Napier has done all investors a service by providing a comprehensive examination of exactly these periods.”

“offers essential advice on how investors can determine what’s really going on. Russell Napier’s book is an excellent guide”

“An accessible yet thorough examination of bear markets for the investor or trader which provides valuable information on the history of market bottoms.”

“Next up, valuations. Can you really argue that today’s markets are not expensive? Actually, you can. Russell Napier, author of Anatomy of the Bear, the definitive book on market bottoms, reckons that equities in the US have since 1881 only twice been as expensive as they are now.”

From By Biagio Campo:

The Federation Budget reduction after the Second World War – As Written by Russell Napier in the beautiful “Anatomy of the Bear”, published by Harriman House reveals: “Since the Pearl Harbour attack on the United States Victory Day on Japan, the Fed’s credit rose from $ 2.3 billion to $ 22.9 billion, about six times… Read more »

From Italian version of Traders' Magazine:

Starting with the traditional indicators on the evaluation of markets, the book analyzes the signals that can be caught before a fix or an uptrend. The author believes it is essential in the current context to perform an analysis on the possible risks of inflation and deflation to identify future market cycles. A book full… Read more »

One of my daughter’s favourite books so far in her short life has been “We’re going on a bear hunt”, a tale of how an incredibly irresponsible parent leads his family across treacherous deep rivers, through snowstorms and swamps in search of a bear, of whom part of the repetition so loved by toddlers is… Read more »

In our world of fractional reserve banking, the money we use for transactions is only created when commercial banks lend money and, through the true alchemy of finance, thus create bank deposits. It is those bank deposits with which we purchase goods and assets and not the bank reserves created by central banks. As commercial… Read more »

By Brenda Jubin of Reading The Markets Described as ?a cult classic in the investment community,? Russell Napier?s Anatomy of the Bear: Lessons from Wall Street?s Four Great Bottoms, first published in 2005, is now in its fourth edition, with a new foreword and preface (Harriman House, 2016). Napier remains a bear. He believes that… Read more »

Financial historian Russell Napier gives his take on how to spot the bottom of a bear market Not all bear markets are created equal. Some matter and some do not. The technical definition of a bear market, a 20pc decline in the share index, can be of little importance if it does no long-term damage… Read more »

VIDEO: The current bear market has a while to run, argues Russell Napier, Author of ‘Anatomy of the Bear: Lessons from Wall Street’s four great bottoms’. Look at cash, look at gold, and wait for stocks to become cheap again, he says.

VIDEO: The cyclical nature of financial markets gives confidence to analysts. We all know when we hit bear territory it’ll only last so long before we start seeing bullish sentiments start to filter through. The question is when? World Finance spoke with Russell Napier, a financial archaeologist, who analysed Wall Street Journal articles two months… Read more »

Conclusions
- Strategic
- Tactical
- Then and now