From Nothing to Everything 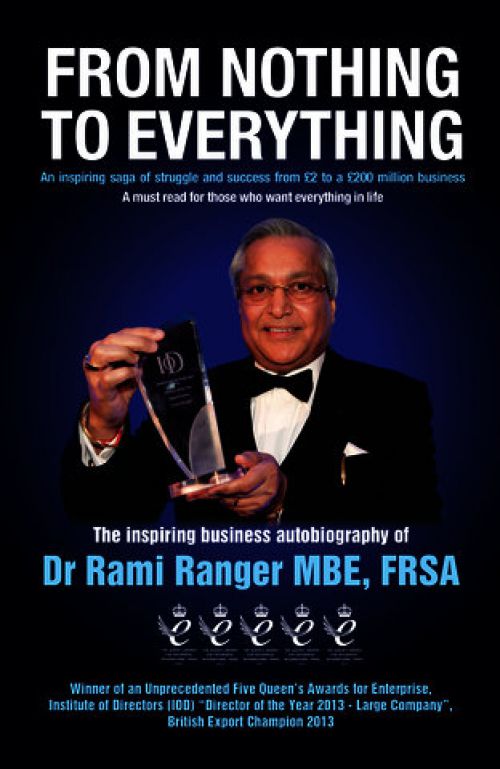 From Nothing to Everything

From Nothing to Everything tells the extraordinary story of Rami Ranger, award-winning business-owner, philanthropist and political reformer. Beginning with a dramatic flight from home during the turmoil of the break-up of India in 1947, Rami’s journey takes in the assassination of his father, childhood hardship under the guiding hand of his mother, emigration to England and the long fight against prejudice to achieve success on a scale he could hardly have imagined as a naive young immigrant in London in 1971.

Having founded his first enterprise with just Â£2 and a typewriter in 1987, Rami now oversees Sun Mark, a Â£160-million-a-year operation that has become one of Britain’s fastest-growing and most decorated businesses. The business has received a record-breaking five successive Queen’s Awards and Rami himself has been awarded the MBE for his efforts to foster greater social and political opportunities for the British Asian community.

En route from poverty to riches, Rami offers lessons in business and lessons in life, drawing heavily on the values instilled in him by a mother who, having lost her husband, home and ancestral homeland, refused to give up on her children. As Rami himself puts it: “My story shows that one does not need a rich father, an elite education or the old schoolboy network to help one in life. What one needs is self-respect, ethics, commitment and empathy for others.”

It has indeed been a journey from nothing to everything for one of the most successful British Asians of his generation – and his story, told in his own words, provides an inspiration for anyone who faces obstacles in their quest to fulfil their dreams and ambitions.

Having founded his first enterprise with just £2 and a typewriter in 1987, Rami Ranger now oversees Sun Mark, a £160-million-a-year operation that has become one of Britain's fastest-growing and most decorated businesses. The company has received a record-breaking five successive Queens Awards and Rami himself has been awarded the MBE for his efforts to foster greater social and political opportunities for the British Asian community.

“…Rami offers lessons in business and lessons in life. The story, told in his own words, provides inspiration for anyone who faces obstacles in their quest to fulfill their dreams and ambitions”.

“Rami Ranger has consistently distinguished himself as one of the UK’s leading entrepreneurs. Throughout his long career he has singled himself out as a leading businessman and a campaigner for social reform, with the numerous accolades for his company, Sun Mark, being just one example of his entrepreneurial zeal.”

“I cannot believe that anyone before has risen from so low to the heights now occupied by Rami Ranger. There may never have been a more inspirational book than this – a ‘must read’ by one of the greatest of modern entrepreneurs.”

“[He has] demonstrated true leadership, sharing his enthusiasm with his staff, rewarding success and driving growth through a strong customer-centric approach [and] an inspirational ethical outlook on his business.”

“Rami is a tremendous businessman, an inspiring philanthropist and a kind-hearted gentleman. What he lacked in terms of a formal education, he has more than made up for with effort, determination and entrepreneurial skill. He has helped to make Britain a better and more successful place and I am delighted he has taken the time to tell his story.”

“Rami’s story is unique – a martyred father – a childhood of struggle – a flair for enterprise and innovation and a deep, deep sense of community and service. But his character is even more exceptional than his story.”

“Rami Ranger has led an extraordinary life. He has overcome tragedy and adversity to become one of the UK’s best known and most successful businessmen.”

“Rami Ranger’s success comes from within himself. His approach to life is one of hard work, imagination, self-confidence, and strong friendships. His achievements have been breath-taking.”

“From humble beginnings he has reached great heights … He is a fine example for all of us in the community and a great credit to this country.”

“A true servant of Britain in so many capacities – I can only imagine he never sleeps.”

“One of our country’s greatest business minds and leaders. His business vision and global success is immense and he is the embodiment of so many values that we British Asians all hold dear.”

“Rami came to Britain with practically nothing and yet has managed to build up one of the most successful exporting companies in the country.”

“Rami, through his story, is a role model for many people living around the world – his life shows that it doesn’t matter what your background is; with the right commitment anyone has the chance to succeed if they follow their ambitions.”

“His life has been extraordinary and he is an inspiration for others to follow.”

Rami Ranger, the award winning business owner of Sun Mark, philanthropist and political reformer shares his inspiring story to the top in his new book From Nothing To Everything. Beginning with a dramatic flight from home during the turmoil of the break-up of India in 1947, Rami’s journey takes in the assassination of his father,… Read more »

1. The Proudest Indian Mother
2. The Carefree Boy Gets Sorted
3. My Father's Shadow

4. Welcome to England
5. Growing Up
6. First Steps in Business
7. Back to Work

8. A Brand New Venture
9. Heading for the Sun
10. How to Build a Business That Grows ... and Grows
11. The Importance of Vision and Leadership
12. In My Father's Footsteps
13. Rewards and Passing on my Wisdom