The art of writing well 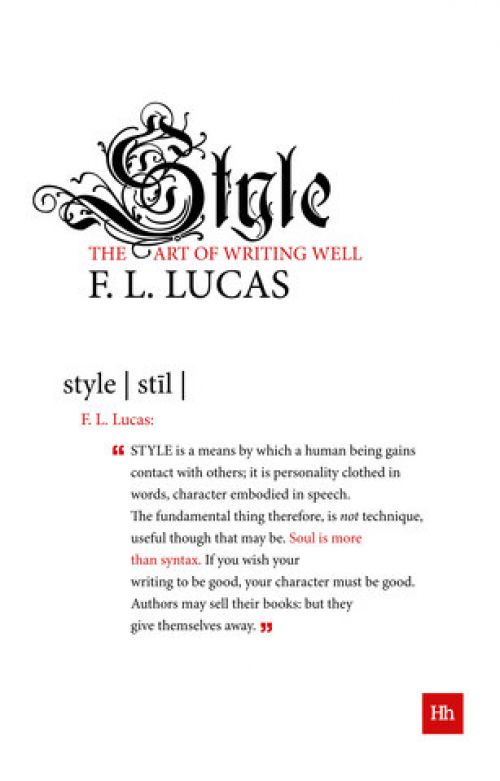 The art of writing well

“The best book on the art of writing that I know is F. L. Lucas’s Style”
– Joseph Epstein, New Criterion, June 2011

Lost for almost forty years, Style has acquired the status of a legend. Loved by some of the greatest modern authors and acclaimed by critics, this guide to recognising and writing stylish prose was written by a Cambridge don and veteran of Bletchley Park. Imbued with a lifetime of wit and wisdom, it retains its power today.

Writing forcefully and persuasively has never mattered so much – and Style is the perfect guide for the busy, the ambitious, and the creative.

With unique authority and good humour, F. L. Lucas takes us through his ten points of effective prose style and provides a tour of some of the best (and worst) that has been written in a number of languages and literatures. Wry, perceptive and rich in quotation and anecdote, the book reads like a personal conversation on the art of writing well – with a master of the art.

F. L. Lucas (1894-1967), Fellow of King's College, Cambridge, was a distinguished scholar known for his studies of the classics as well as of English literature. The Sunday Times wrote that "Lucas has distinguished himself in more than thirty volumes as a poet, a novelist, a translator, a biographer, a critic and an editor. He is entitled to write about style because he writes with style."

“This book is certain to delight many readers”
– Sunday Times

“Lucas’s advice can do nothing but good. His own style illustrates the virtues he commends.”
– Guardian

“Young readers particularly should find his book useful not only for what it has to say about style but for the supple and manly prose in which it is written.”
– Times Literary Supplement

“By following his own precepts, and by the modesty and wit with which the enormous range of his learning is put at his reader’s disposal, Lucas has written a thoroughly enjoyable and stimulating book.”
– Daily Telegraph

“This is a splendid book.”

Style comprises eleven lectures, first delivered at Cambridge and then rewritten. It is a considerable book. Its author is the British scholar F.L. Lucas (1894?1967), and his theme is style itself, specically style and language. It is not comprehensive in the manner of Fowler?s Modern English Usage (a book he praises). ?I have merely tried,… Read more »

Style: The Art of Writing Well (1955) by F.L. Lucas holds the origin to those immortal words so often repeated and quoted by writing professors to their young students: ?murder your darlings,? meaning to delete those phrases most cherished by the writer who wrote them. Actually, the quote so often used by professors is not… Read more »

With the Value Investing Conference having wrapped up (see notes here), investors will be pouring over the ideas offered up by some of the premier thinkers in attendance. The ideas that appear to gain the most traction appear to come from those who know how to communicate well. But most of us are poor communicators.… Read more »

Frank Lucas?s Style is based on lectures the author gave at Cambridge University in which he expands on ten points of effective prose style with plenty of examples of some of the very best published writing to demonstrate these principles. Each chapter discusses the qualities that make for what Mr Lucas describes as a lucid,… Read more »

In June of 2011, the New Criterion published Joseph Epstein?s ?Heavy Sentences,? ostensibly a review of Professor Stanley Fish?s How to Write a Sentence (and How to Read One). I write ?ostensibly? because Mr. Epstein, finding nothing praiseworthy in the professor?s ludicrous little book, made his review the occasion for some general remarks about prose… Read more »

From The Times Literary Supplement:

We?re all writers nowadays, living in the era of the blog, the age of anti-elitism, the epoch of self-publishing. Editors at mainstream houses do many things, but editing isn?t always one of them. And yet, and yet . . . a line divides the good writer from the late-night assailant of the defenceless keyboard. To… Read more »

About the Author
A Brief History of Style