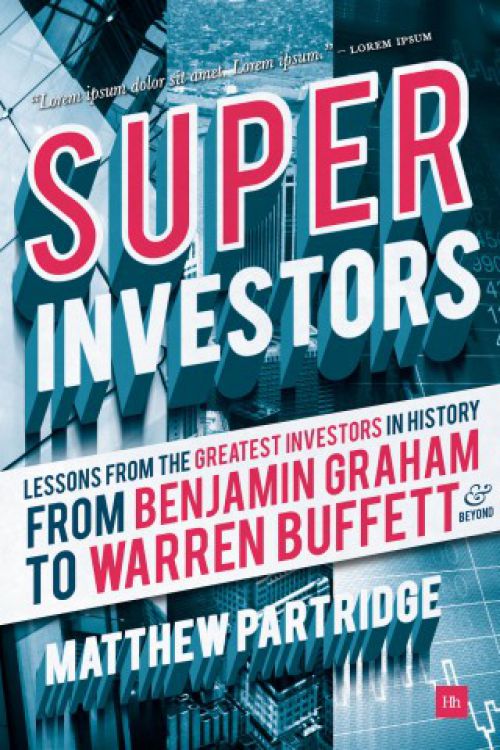 The ultimate guide to history’s greatest ever investors

Superinvestors lays bare the investing secrets of legendary investors – from early 20th-century figures such as Benjamin Graham and John Maynard Keynes, through to more modern names such as Anthony Bolton and Warren Buffett.

Listen to a sample of the audiobook version of Superinvestors.

The investors have been picked for a variety of criteria, including their investing excellence, the different ways in which they have made money – and above all for what they can teach individual investors.

A wide range of investment styles are represented, ranging from David Ricardo (who made a fortune by correctly predicting the outcome of the Battle of Waterloo), to the patient value-orientated approach of Warren Buffett. The book also looks at some important innovators, including John Bogle and his development of index funds as a low-cost way of getting exposure to the market, and Edward O. Thorp and his data-driven approach which aims to avoid human emotion.

The book looks at each of the investors’ careers in depth. This includes their background, the strategies used to beat their peers, and an honest evaluation of their success, using a special star-rating system. Naturally, the main focus is on their best investments. However, sometimes failures can be extremely instructive – so the book also looks at those investments that didn’t quite go to plan. Finally, each chapter concludes by detailing the lessons that ordinary investors can learn from the superinvestor.

The result is a treasure trove of success stories, cautionary tales, legendary stock picks and world-beating strategies that will fascinate and inspire investors of every level.

Matthew Partridge is an experienced financial journalist. He writes for MoneyWeek magazine, Britain's biggest-selling personal finance weekly. A trained historian, Matthew did a degree in economics and history at the University of Durham, before doing a master's and a doctorate in economic history at the London School of Economics. He has taught at Goldsmiths, University of London, as well as spending time at various investment banks and a well-known economics consultancy.

“..this book is a worthwhile addition to the category….Anyone considering investing in the stock market for the first time or even with years of investing experience will benefit from the insight provided by these super investors.”

“If you are a private investor it will show you what can make for success. If you are a professional fund manager it will provide you with useful insights on your rivals and those who came before you – and perhaps get you rating yourself.”

Clive Moffatt (from the foreword)

“…an enjoyable romp through some interesting and influential investment personalities.”

Is one of your early new year’s resolutions to be a more successful investor? Your Christmas reading should include Super Investors: Lessons From The World’s Greatest Investors (Harriman House, £24.99), a new book that reveals the secret of such stock market legends as Warren Buffett. The author, Matthew Partridge, an academic, also focuses on lesser-known… Read more »

The investors have been picked for a variety of criteria, including their investing excellence, the different ways in which they have made money, and above all, for what they can teach individual investors…The result is a treasure trove of success stories, cautionary tales, legendary stock picks and world-beating strategies that will fascinate and inspire investors… Read more »

From Investing by the Books :

”The book benefits from the author’s deep knowledge of UK investors … The author is clearly well read … It is never possible to do an investor justice over 6 to 8 pages. However, it is through books like this that many up and coming investors have gotten a glimpse of their role models for… Read more »

There have been over a dozen books published over the years on the most successful traders, investors, and hedge fund managers. These include three books on traders written by Jack Schwager, and others authored by Ari Kiev, Fari Hamzei, Ronald Chan, Cathleen Rittereiser, Lawrence Kochar and Ian Floyd. Matthew Partridge, a British author, joins this… Read more »

Truly a great book…. It’s interesting… It looks at all kinds of investing …. great, great examples of some of the top minds in investing and how they did it.

These 20 have not just outperformed the market but have done so over extended periods. Read the five things that 20 of the most successful and influential investors in history — I call them Superinvestors — have in common.

This is a great read.

“….an enjoyable romp through some interesting and influential investment personalities.”

Superinvestors is the ultimate guide to history’s greatest investors, from early 20th-century figures such as Benjamin Graham and John Maynard Keynes to modern gurus such as Anthony Bolton and Warren Buffett. Superinvestors examines their careers in depth, with emphasis on the strategies used to beat their peers, their best investments and why they worked, and… Read more »

If people want some inspiration, get a copy of Superinvestors Listen here: www.talkradioeurope.com/clients/mpartridge.mp3

About the Author
Foreword by Clive Moffatt

1. Jesse Livermore - The Trend-Following Boy Plunger
- A self-made man
- From the farm to Wall Street via bucket shops
- Reading the tape like a conductor
- From rags to riches to rags
- The man who brought down the market
- Blowing money on other investments
- What Livermore's story teaches us

2. David Ricardo - The Napoleonic Speculator
- Introduction
- How did he start out?
- Taking advantage of hysteria
- Small profits add up to a lavish lifestyle
- Ricardo's Waterloo
- Difference between investing and speculation

4. Michael Steinhardt - The Contrarian Hedge Funder
- Introduction
- The sociology of the markets
- From block trading to variant perception
- The not so Nifty Fifty
- The trades that didn't work out
- Huge returns
- Worthwhile, but difficult

6. Warren Buffett - The Elder Statesman of Finance
- Introduction
- From Omaha to Wall Street
- From value to growth
- Six decades of success
- Picking up where Graham left off
- What we can learn from Buffett

10. T. Rowe Price - The Pragmatic Growth Investor
- Introduction
- From chemistry to money management
- Growth - but not at any price
- Strong track record
- High-flying stocks
- Other lessons for investors

11. Peter Lynch - The Man Who Beat the Street
- Introduction
- From the golf course to fund management
- Bottom-up investing
- Outpacing the bull
- Liked the company, bought its shares, made a packet
- Growth investing simplified

12. Nick Train - The Inactive Optimist
- Introduction
- Apprentice becomes the master
- Finding value in growth
- Buying shares in good-tasting companies
- Stocks - and stock markets - for the long run
- Exceptional performance
- What has worked...
- ...and what hasn't
- Keeping it simple

14. Eugene Kleiner and Tom Perkins - The VCs of Silicon Valley
- Introduction
- The refugee and the executive
- Investing in edible dog food
- Two big successes
- What you can learn from Kleiner Perkins

15. John Templeton - The Global Investor
- Introduction
- From poker player to star fund manager
- Investing abroad - and against the herd
- Getting Japan right, wrong and right again
- Importance of overseas investing

16. Robert W. Wilson - The Short Seller
- Introduction
- Putting his investing before his day job
- Adding leverage to hedged investments
- Turning a nest egg into a large fortune
- Success on both the long and short sides
- Squeezed in Atlantic City
- The eighth wonder of the world

17. Edward O. Thorp - The Revenge of the Quants
- Introduction
- From blackjack to the stock market
- Systematic and scientific investing
- High returns, low risk
- Other good investments
- How to follow in Thorp's footsteps

19. John 'Jack' Bogle - The Founder of Index Investing
- Introduction
- Poacher turned gamekeeper
- Buying the dartboard
- First they laugh at you, then they copy you
- Does passive investing work?
- Depressing or liberating?

Conclusion: Lessons of the Superinvestors
- 1. The market can be beaten
- 2. There are many roads to investment success
- 3. Be flexible...
- 4. ...but not too flexible
- 5. Successful investing requires an edge
- 6. When you do have an edge, bet big
- 7. Have an exit strategy
- 8. Ordinary investors have some advantages
- 9. Big isn't always beautiful
- 10. It's good to have some distance from the crowd
- The best superinvestor?