Birth of the Age of Debt 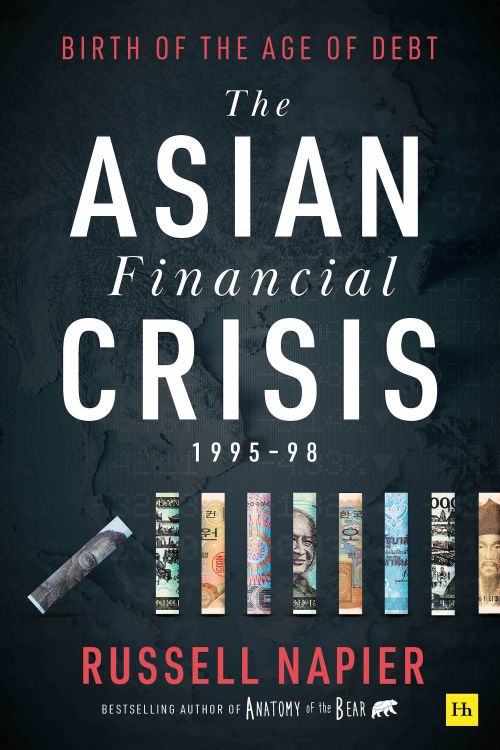 Birth of the Age of Debt

In the space of a few months, across Asia, a miracle became a nightmare. This was the Asian Financial Crisis of 1995–98.

In this economic crisis hundreds of people died in rioting, political strong men were removed and hundreds of billions of dollars were lost by investors.

This crisis saw the US dollar value of some Asian stock markets decline by ninety percent. Why did almost no one see it coming?

The Asian Financial Crisis 1995–98 charts Russell Napier’s personal journey during that crisis as he wrote daily for institutional investors about an increasingly uncertain future. Relying on contemporaneous commentary, it charts the mistakes and successes of investors in the battle for investment survival in Asia from 1995–98.

This is not just a guide for investors navigating financial markets, but also an explanation of how this crisis created the foundations of an age of debt that has changed the modern world.

Professor Russell Napier has been an adviser on asset allocation to global investment institutions for over 25 years. He is author of Anatomy of The Bear: Lessons From Wall Street’s Four Great Bottoms and Keeper of the Library of Mistakes, a business and financial history library based in Edinburgh. He has founded and runs a course called A Practical History of Financial Markets and also an online marketplace (ERIC) for the sale of high-quality investment research to institutions. Russell is Chairman of the Mid Wynd International Investment Trust.

A detailed retrospective on the development and evolution of the Asia Crisis drawn from the contemporaneous notes of a keen observer of economic and financial history… interesting food for thought for investors and policymakers alike.

Russell Napier’s book offers an authoritative and highly erudite account of one of the most consequential events that reshaped the modern world. As a market participant and a keen observer, Russell offers a seat at the table for anyone who wishes to understand the challenges facing today’s policymakers and how the Asia Pacific crisis birthed the age of debt. It is an indispensable guide.

Viktor Shvets, Global Strategist and Author of The Great Rupture: Three Empires, Four Turning Points and the Future of Humanity

A combination of applied and highly practical economics that through reality bridges the gap between policy theory and actual implications and results, but more it is also a travelogue and a diary.

From Society of Professional Economists:

Overall, however, Russell Napier has written another excellent book and I have no hesitation in recommending it to those involved in financial markets and, indeed, to anybody more generally interested in recent economic and financial history.

The book is full of Napier’s personal experiences, many of them highly entertaining. He recalls a Malaysian security official asking him for a stock tip, Ian Botham nominating him for a parachute jump and my favourite, a rendition of Danny Boy on a New York bar. And importantly, the author is not afraid to admit… Read more »

n the podcast we talked about why it is important to understand the history of the stock market, the catalyst behind the Asian Crisis and how we are entering an inflation cycle. Russell was a Consultant Global Macro Strategist with CLSA Asia-Pacific Markets for almost twenty years, where he experienced the Asian Financial Crisis. He… Read more »

And so we turn to Russell Napier’s The Asian Crisis: Birth of the Age of Debt. Napier was working in Hong Kong in 1997, and the book is partly a compilation of the excellent notes he wrote during this “collapse of the entire financial system” and partly an explanation of how the crisis set us… Read more »

Napier’s latest book, “The Asian Financial Crisis: 1995-1998,” covers a period of time that many investors are either not familiar with or haven’t studied anywhere near as closely as they should be given its relevance to the investment regime in which we are living today.

Russell Napier talks to Merryn about financial repression – or “stealing money from old people slowly” – plus how Asian capitalism is taking over in the West; why active management could be back in favour; and why you should probably buy some property.

Once again, Merryn’s got a star guest for this week’s podcast. Author and economic historian Russell Napier talks to Merryn about the Asian financial crisis (the subject of his excellent new book, which you can get at 20% off with the code in the podcast); financial repression – or, as he calls it, “stealing money… Read more »