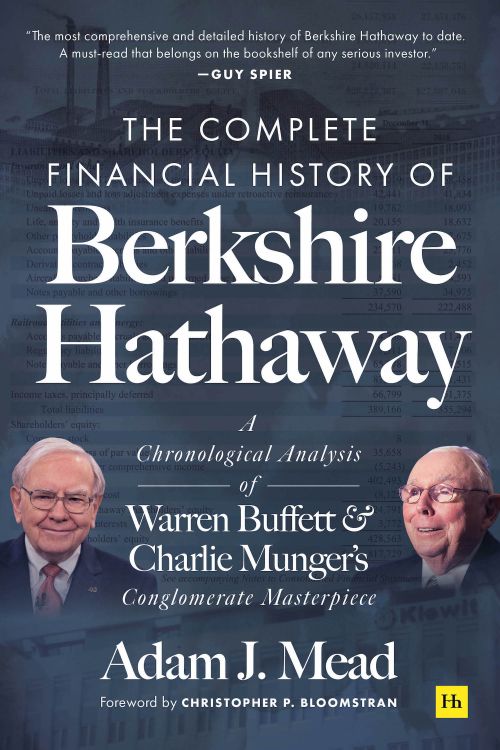 For the first time the complete financial history of Berkshire Hathaway is available under one cover in chronological format. Beginning at the origins of the predecessor companies in the textile industry, the reader can examine the development of the modern-day conglomerate year-by-year and decade-by-decade, watching as the struggling textile company morphs into what it has become today.

This comprehensive analysis distils over 10,000 pages of research material, including Buffett’s Chairman’s letters, Berkshire Hathaway annual reports and SEC filings, annual meeting transcripts, subsidiary financials, and more. The analysis of each year is supplemented with Buffett’s own commentary where relevant, and examines all important acquisitions, investments, and other capital allocation decisions. The appendices contain balance sheets, income statements, statements of cash flows, and key ratios dating back to the 1930s, materials brought together for the first time.

The structure of the book allows the new student to follow the logic, reasoning, and capital allocation decisions made by Warren Buffett and Charlie Munger from the very beginning. Existing Berkshire shareholders and long-time observers will find new information and refreshing analysis, and a convenient reference guide to the decades of financial moves that built the modern-day respected enterprise that is Berkshire Hathaway.

Adam J. Mead is a life-long student of business and capital allocation.

He is the CEO and Chief Investment Officer of Mead Capital Management, LLC, a New Hampshire-based Registered Investment Advisor he founded in 2014.

Adam spent over a decade in banking in commercial credit, including observing first-hand the after effects of the Great Recession and the long credit expansion afterward.

Adam has been investing in public securities markets since 2004. He owned two small businesses (non-financial) during college, and grew up in a family of small business owners. In addition to managing assets for his clients at Mead Capital, he is involved with numerous local non-profit organisations.

Its combination of financial analysis, narrative and historical perspective make it a hugely valuable addition to the Buffett canon.

The question must be asked, ‘Why another book?’ When you read this monumental effort by Adam Mead, the answer will be obvious…read cover to cover, both the uninitiated to Berkshire and its most ardent followers will derive enormous utility and satisfaction from it…I learned so many new and important things about Berkshire and its history. It is my pleasure to encourage you to enjoy this gem.

If you are a value investor, a Berkshire Hathaway, or Warren Buffett fan, this book is the motherlode! The most comprehensive and detailed history of Berkshire Hathaway to date. A must-read that belongs on the bookshelf of any serious investor.

Few activities can be more rewarding for any value investor than studying the history and evolution of Warren Buffett and Berkshire Hathaway. Adam has done us all a huge favor with his yeoman efforts in producing this treatise. Since it is chronologically ordered, it is an invaluable reference guide for all things Berkshire.

For students of history, especially the history of Berkshire Hathaway’s early days, Adam Mead’s book is a must read… It contains storied theft of intellectual property, occurring as early as 1789 when a certain Samuel Slater snuck out of England with knowledge of how to build a viable water-powered mill. It is a story of venture capital. “Financial backers in Pawtucket, Rhode Island” (including, none other than notorious financier, Hetty Green, a rich heiress to a new Bedford shipping fortune) provided venture capital funding for Slater’s business. It involves internet-like speedy growth, with 20 Slater-style mills dotting New England within just the first 20 years. Finally, it entails early versions of SPACs, then called “joint-stock corporations,” underwritten by wealthy Boston merchant, Francis Lowell. Adam commences his story with reference to an entrenched dominant nation, in this case England, worried about their loss of global standing to the upstart, United States, through both fair competition and through America’s use of stolen technology. Sound familiar?

With this project, Adam has a done a wonderful job extending the Berkshire Classroom by providing a comprehensive analysis of the rich corporate history and unique entrepreneurial leadership.

Like Adam, we appreciate the history of Berkshire Hathaway. I and my teammates at the Gabelli Organization have been tracking Warren’s success for some 50 years. . . I first learned of him while at Columbia Business School taking Security Analysis from Roger Murray, who succeeded Graham & Dodd. I got to focus on what Warren Buffett was investing in when I covered Pinkerton’s, Burn’s Detective and Wackenhut, that is business service companies. I noticed how astute he was buying cash flow entities that had some inflation indexing and tax advantages as a shareholder. Fast forward, we have been attending meetings in Omaha for over two decades. We also bought stock in two of our Funds that were initially launched in the mid 80’s – Gabelli Equity Trust (a Closed End Fund) and the Gabelli Asset Fund (an Open End Fund). Adam captures the work and highlights the history of Berkshire and the hard and diligent work of Buffett and Munger.

Adam J. Mead is CEO and chief investment officer of Mead Capital Management and founder of Watchlist Investing. Follow him on Twitter @BRK_Student. This is adapted from “The Complete Financial History of Berkshire Hathaway: A Chronological Financial Analysis of Warren Buffett and Charlie Munger’s Conglomerate Masterpiece.”

On today’s show, Robert Leonard talks with Adam Mead about his book, “The Complete Financial History of Berkshire Hathaway: A Chronological Analysis of Warren Buffett and Charlie Munger’s Conglomerate Masterpiece,” why he wrote it, and what principles he learned from the Oracle of Omaha as he and his conglomerate evolved over time. Aside from being… Read more »

In any Amazon book search, one can find some 200 titles about Warren Buffett, Charlie Munger or Berkshire Hathaway. Yet, the book Adam Mead was searching for never existed – a complete listing of every purchase that Berkshire Hathaway made from its very beginning. Even Hagstrom doesn’t come close in his great book, The Warren… Read more »

One of Berkshire’s largest investments ever was the $16.9 billion in buybacks the company made in the first three quarters of 2020. Mr. Buffett had shunned buybacks for years before starting to slowly take them fairly recently. “I think it’s in fact far more intelligent use of capital than dividends,” said Adam Mead, chief executive… Read more »

From The Accent Podcast:

Adam J. Mead is a CEO & CIO of Mead Capital Management and the Author of the most comprehensive book on BRK – “The Complete Financial History of Berkshire Hathaway”.