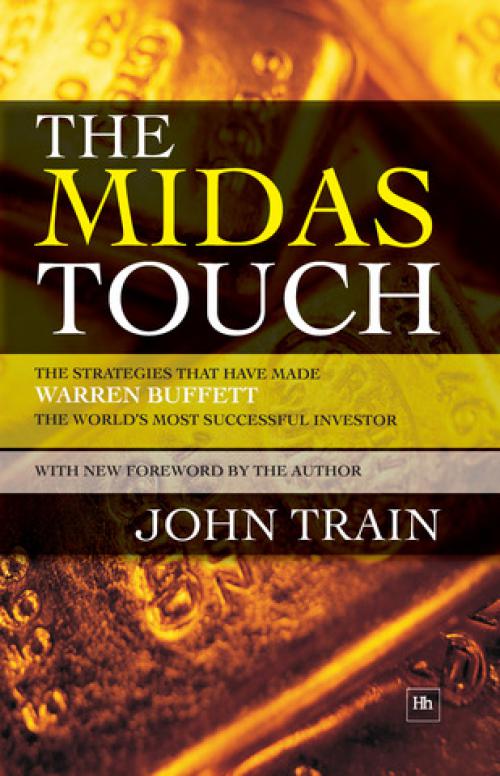 If you had put $10,000 in Buffett’s original investing partnership at its inception in 1956, you would have collected about $293,738 by the time he dissolved it at the end of 1969. He had never suffered a down year, even in the severe bear markets of 1957, 1962, 1966, and 1969. When the partnership was wound up, you could have elected to stay with Buffett as a shareholder of Berkshire Hathaway, Inc., which was spun off from the partnership and became Buffett’s investing vehicle. In that event, your $10,000 would by the end of 1986 have turned into well over $5 million.

So, John Train introduces the remarkable story of Warren Buffett in his classic text, ‘The Midas Touch’. First published in 1987, ‘The Midas Touch’ was one of the first books to recognise Warren Buffett’s spectacular record, and to attempt to explain how he achieved his success. It is short, lucid and written with style and wit. A worthy testimony to its remarkable subject.

From the back cover of the book:

This is the book that tells readers how to invest like the man known as ‘the Wizard of Omaha’ (Forbes) and the investor with ‘the Midas Touch’ .

Warren Buffett is the most successful investor alive – the only member of the Forbes 400 to have earned his fortune entirely through investing. Bestselling author John Train analyzes the strategies, based on the value approach, that have guided Buffett in his remarkable career, strategies that work even though Buffett operates a thousand miles from Wall Street.

John Train founded Train, Smith Investment Counsel in New York. His other books on investing include 'The Craft of Investing', 'The Money Masters' and 'The New Money Masters'. Train has also written several hundred columns for the Wall Street Journal, Forbes, the New York Times, Harvard magazine, and other publications.

‘The Midas Touch traces the highlights of Mr Buffett’s life and career from his childhood in Omaha … to his spectacular coups in the market over the past 30 years.’

‘The Midas Touch is definitely not for a total beginner as it assumes a certain basic level of knowledge. If you don’t know what a PE ratio is then you need something more basic. But if you think that you are going to double your money in two months because you have just bought a stock on a PE of 35 after it was tipped in Shares magazine you need to read on. Advanced Buffettologists won’t learn much from this book – they have probably read it already. But if you know that Warren Buffett is a legend but not why this is a concise and easy to ready way of finding out.’

‘Provides an excellent glimpse into Buffett’s life, ideas, and background as well as detailed discussions of Buffett’s investment philosophy and techniques.’

‘The Midas Touch is a fabulous value … imparts a wealth of lessons for any investor to emulate, no matter how skilled.’

‘John Train has a global vision of investing. He understands men and markets. He is an outstanding market forecaster. He writes elegantly. Like the Midas of his title, the things he touches turn to gold.’

According to Forbes Magazine: There is a handful of terrific books by terrific writers, many of whom invested money for a living; none is better than John Train. While I would not go as far as that, I would suggest that for many Trains The Midas Touch could prove to be an interesting and informative… Read more »

From The Daily Telegraph:

The Best of ?Woodstock for Capitalists,? Part 3: The Most Logical Answer The Midas Touch; Good Businesses and Bad Businesses; and Moats Filling Up with Sand. ?Years ago you warned against utilities,? began the second-to-last question of the day, from a Costa Mesa, California shareholder. (Shareholders picked by lottery alternated with questions submitted to, and… Read more »

2. Some Favourite Investing Principles
Good Businesses and Bad Businesses
The Market and Fair Value
Nothing Exceeds Like Success
Pricing the Whole House
The Part Is Better Than the Whole
Risk and Reward
The Margin of Safety
Zigging When You Ought to Zag
The Efficient Market Hypothesis
The Out of My League Dilemma
The Leverage in Insurance Companies
The Cash Magnification Effect
The 12 Percent Equity Bond
Goodwill - the Gift that Keeps Giving

4. How to Invest Like Buffett
Understand the Figures
Apply Your Own Business Experience
Go and Look
Know the Values
The Secret: Steady Compounding
Avoid Risk
What It Takes to Be a Good Investor
What Makes a Bad Investor