The Retreat of Globalisation

Anticipating radical change in the culture of financial markets 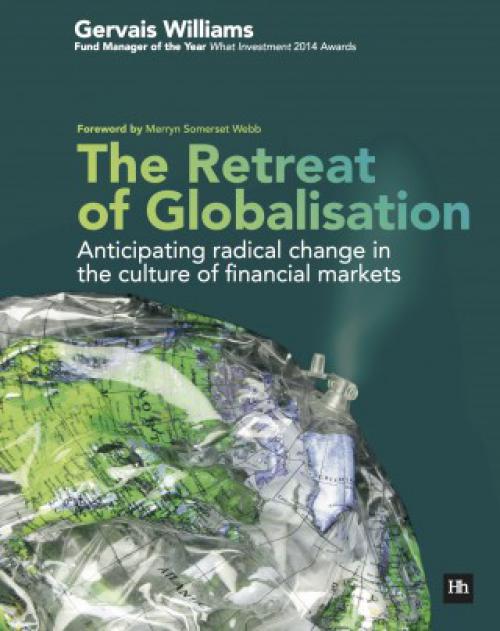 The Retreat of Globalisation

Anticipating radical change in the culture of financial markets

In The Retreat of Globalisation, award-winning fund manager Gervais Williams outlines why we are entering a period when the culture of financial markets will change more in three years than it has in the last 30.

Globalisation has been running into headwinds for a while, but until recently few appreciated that it had already passed its high-water mark. With the benefit of hindsight, we can now see events like Brexit and the election of Donald Trump in the context of a new social – and economic – trajectory.

Markets have already entered a period of flux. Social disenchantment with globalisation was already a political issue. But the market implications of a retreat from globalisation remain greatly under-appreciated.

How can savers know what might constitute the best stocks in this changed world? The Retreat of Globalisation argues for some unconventional yardsticks going forward. The answers may seem counter-intuitive to those who have only known one set of economic conditions. But the need to find those answers has never been more pressing.

Gervais Williams is an award-winning equity fund manager. As a professional investor, he has exceptional credentials. He received Grant Thornton's Quoted Companies' Award Investor of the Year in both 2009 and 2010; then in 2012 his Diverse Income Trust was recognised as the Best New Investment Trust by the Association of Investment Companies. He was also What Investment's Fund Manager of the Year 2014.

Gervais is a respected commentator on prospective market trends. He outlined his controversial views in his book Slow Finance in 2011 and develops those ideas in The Future is Small.

Gervais has worked in the City since 1985, where he is particularly well-known for the management of clients' investments in small to medium-sized UK companies.

Find out more at: http://gervaiswilliams.com

“The book is a fascinating walk through the rise of passive and the threats and opportunities for stock pickers in volatile times.”

“Williams’ focus on the importance of corporate profit margins is particularly welcome and his investment recommendations are sensible without being obvious. Both private investors and professionals should take the time to read this book.”

“Williams writes well – not always a given for fund managers – and his 30 years of investing experience gives his arguments credibility to my mind and this is an accessible read that makes you think a bit more than other books out currently.”

“…serious investors should read it because it is thought provoking and challenges conventional thinking.”

Rodney Hobson, Morningstar and author of Shares Made Simple

Today on the show I’m joined by Gervais Williams, author of The Retreat of Globalisation. Gervais Williams is an award-winning equity fund manager. As a professional investor, he has exceptional credentials. He received numerous awards for his fund management, including being named What Investment’s Fund Manager of the Year 2014. Gervais is a respected commentator… Read more »

Gervais Williams has a strong track record as both a fund manager and author: previous lauded books have included “Slow Finance”, which looked at long-term investing in a short attention-span world, and “Small is beautiful”, which argued that investing in small caps was both good for returns and the economy more broadly. His latest book,… Read more »

THE POPULIST UPRISING By Tjbbe Hoekstra Once the preserve of the left, anti-globalisation sentiment has crossed over to the mainstream. Is the populist swing away from globalism a blip, or something more permanent? And what will be the impact on investors? For decades, the anti-globalisation movement has been associated with dissenting leftist radicals holding protests… Read more »

Stuck on what to buy the financial services professional in your life for Christmas? How about an investment book? Lawrence Gosling runs through some of the titles that have hit our desks in recent weeks. My current favourite out of the books we received in the office is Paul Mumford’s The Stock Picker, a history… Read more »

The End of Globalisation? The end is nigh. Not the end of the world but the end of the world as we know it. That’s the message of a book published this week, and although I don’t entirely accept all the arguments in it I do think serious investors should read it because it is… Read more »

“What do you mean it’s the end of the party?” asked the chairman of the improbably-sized investment company Prandeamus Asset Management when I bumped into him this week at the launch of Gervais Williams’s new book. “I’ve only had one glass.” “That’s not what I said,” I replied. “I was observing the two speeches we… Read more »

Video interview with Gervais about his new book

Gervais Williams, managing director of Miton Group, has published a new book, ‘The Retreat of Globalisation’ warning: “Index funds have passed their sell-by date. Expect more change in the markets in the next three years than in the last thirty.” After Brexit and the election of Trump, the financial world is entering a momentous period… Read more »

[Audio recording] Welcome to the 29th SHARETALK’S CONKERS’ CORNER. In this interview I have the privilege of speaking with award winning Investment Fund Manager @gervais_mam Gervais Williams. He is currently the Managing Director of Miton Group Plc, where he and the team monitor the market trend changes beyond the credit boom, and aim to set… Read more »

1. The World as We Know it
2. The Strange Case of Corporate Profits
3. The Age of Plenty
4. The Second Major Credit Boom
5. The Balance Between Growth and Decay
6. A Profits Recession
7. Aggregate Risks
8. Turn and Face the Change
9. Niche is Nice
10. Productivity Improvement
11. Superior Service Standards for Superior Returns
12. Risk Reduction

Conclusion: The Changing Face of Finance