The Richest of the Rich

The Wealthiest 250 People in Britain since 1066 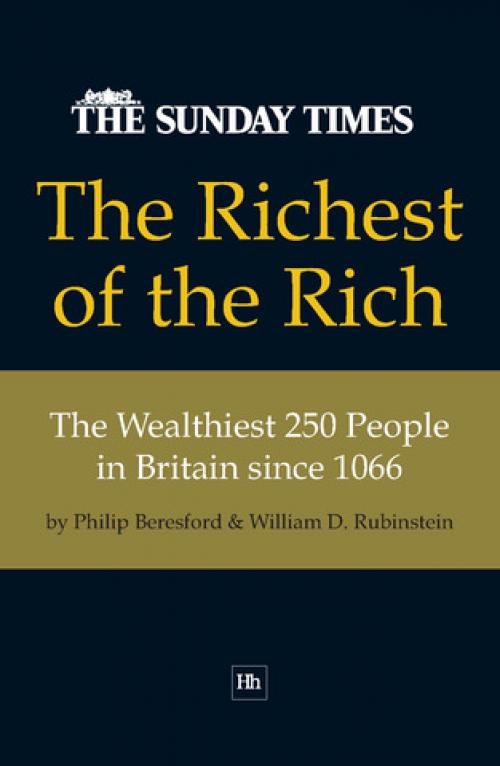 The Richest of the Rich

The Wealthiest 250 People in Britain since 1066

A comprehensive study of Britain’s 250 richest people in history, from the time of William the Conqueror to the present.

In this book, Philip Beresford, the author of The Sunday Times annual ‘Rich List’ and history expert William D. Rubinstein, have turned their attention to the wealthiest individuals in British history, revealing how they made their fortunes, the role played by luck, contacts and violence, and how successful they were in hanging on to their gains.

– William of Warenne, the Earl of Surrey in the 1050s, who if he were alive today would be worth nearly Â£74bn – over three times richer than Britain’s current richest man (steel magnate Lakshmi Mittal).

– Archbishop Thomas Beckett, who took 250 servants with him on a visit to Paris in 1158, and was worth over Â£24bn. Not that his fortune was much use when he was murdered in his own cathedral on the orders of Henry II.

– Robert Spencer, forebear of Princess Diana, who made a fortune in the wool trade, owned vast tracts of land in the colony of Virginia. and accumulated a fortune equivalent to Â£19bn in today’s money.

– John Scott, a celebrated gambler whose skills and luck helped him to a Â£500,000 (Â£3.1bn) fortune. “As rich as Scott” was a popular saying of eighteenth century society.

The authors provide a fascinating account of personal wealth and influence, noting how, throughout history, the opportunities for aggrandising wealth have been changed by technology, demographics, taxation, politics and war. If you are interested in business, society and the shifting patterns of advantage then you will find this book absorbing, intriguing and insightful.

Philip Beresford compiles the annual Rich List for the Sunday Times. He was previously editor of Management Today and industrial editor of The Sunday Times before taking up wealth-tracking full time.

William D. Rubinstein is Professor of History at the University of Wales, Aberystwyth. He writes on a wide variety of topics, including elites and the wealthy in Britain and Australia.

About the authors
Introduction