The continuing story of The Economist poster campaign 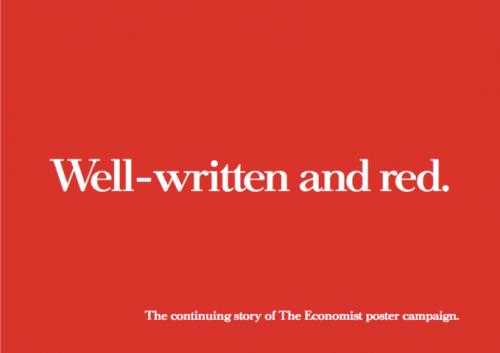 The continuing story of The Economist poster campaign

It is now 18 years since The Economist ran the first of its eye-catching ‘White out of Red’ posters. As this book points out, their ‘vibrancy and visibility’ have now established them as ‘part of the urban landscape’.

Well-written and Red is the story of this influential advertising campaign, written by one of Britain’s most respected advertising copywriters, Alfredo Marcantonio. As an ex-Director of AMV BBDO he paints a remarkably insightful picture, not only of the conception and development of the award-winning creative work, but also of the Agency/Client relationship that has nurtured it.

Marcantonio weaves together the recollections of those actually involved, putting events into context or stressing their importance, by citing lessons he has learnt in his own distinguished career.

This is clearly a ‘must-have publication’ for advertising, marketing and the media. However, poster headlines like ‘In real life the tortoise loses’ mean that it will appeal to anyone who appreciates wit and style. Whilst readers from outside the industry won’t be fazed by the vagaries of the creative process, they may be surprised to discover the disciplined strategic thinking and tight advertising briefs that inspire it. And the way that subtle shifts in emphasis have helped the campaign remain relevant in changing times.

This 256 page volume features almost 200 of the advertisements that have helped The Economist increase its UK circulation from just over 80,000 in 1987 to almost 160,000 today. It represents a testimony to the power of posters, confirmation that it can pay to advertise and proof that ‘funny’ need not be the enemy of ‘money’.

Alfredo Marcantonio was Advertising Manager of Volkswagen GB during the early seventies. Inspired by DDB's work on the account, he left to be a copywriter in 1974.

Marc went on to become a successful Creative Director and worked on many of Britain's most popular advertising campaigns. Including Hamlet Cigars, Heineken, BMW and Carling Black Label.

In 2003 he co-founded the London-based creative consultancy MPH (Marcantonio Plus Hobbs).

beautifully designed and enjoyable to read…it’s every bit as good a book as the campaign deserves- BNET, April 2004