When the Fund Stops

The untold story behind the downfall of Neil Woodford, Britain’s most successful fund manager 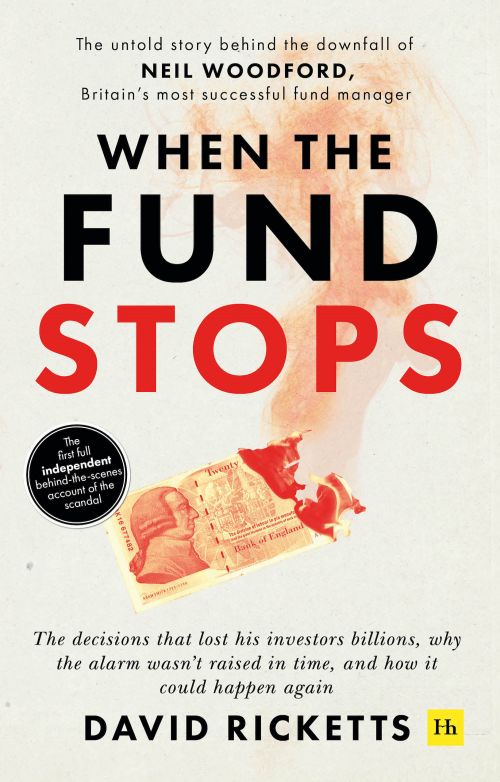 When the Fund Stops

The untold story behind the downfall of Neil Woodford, Britain’s most successful fund manager

Neil Woodford was the UK’s most celebrated fund manager. Savers who invested £1,000 with him in 1988 saw their money increase to £25,000 over 25 years. At the peak of his career he was managing £33 billion for hundreds of thousands of investors.

When he started his own fund management company in 2014, within just a few weeks it had attracted £5bn from his loyal fan base, including some of the City of London’s biggest hitters. Life was good. Away from work he was collecting high-performance supercars and chunky designer watches; he was rarely out of the saddle of his favourite horse. The BBC called him the “man who can’t stop making money”.

And then it all came to a sudden stop.

This book tells the dramatic untold story behind Woodford’s stunning rise and fall, and reveals why his multi-billion-pound investment empire really collapsed in such an abrupt and catastrophic manner.

In a fast-moving and compelling narrative, reporter David Ricketts takes readers inside the rooms where extraordinary sums of other people’s money were wagered, trapped and, ultimately, lost, in a scandal still sending shockwaves through the world of finance.

Thanks to unique and unprecedented access to the most important players, we meet an eccentric cast of characters and go inside the institutions involved, from Woodford’s own firm to those that made huge sums endorsing him – as well as those who failed to raise the alarm before it was too late.

David Ricketts is an experienced financial journalist and has covered the fund management industry for more than a decade. He is asset management correspondent at Financial News, the Dow Jones-owned publication based in London where has worked since 2017. He began his career as a reporter at the Financial Times Group just before the onset of the global financial crisis. He lives in Kent with his wife and two children. This is his first book.

A revelatory book, which fascinatingly recounts how small investors were let down by a big fund manager who lost his golden touch and lost them significant amounts of money. Essential reading for ordinary investors and hopefully a wake-up call for regulators too.

A page turner that gives a fly-on-the-wall account of how Woodford went from hero to zero. It serves a salutary reminder of how a sure-fire winner, left unchecked, can cause so much financial misery to hundreds of thousands of small investors who were led to believe that Woodford had the Midas touch. The book singles out the red flags that were ignored by investors, their advisors and the regulators alike. It deserves to be read widely in this age where individual investors are obliged to plan for their own retirement nest egg.

This is an interesting book, written as a fast paced story that makes you eager to turn the next page. I highly commend David Ricketts’ book as recommended reading for any investor prior to allocating significant money to any fund manager.

A highly readable account of one man’s rise and fall from grace in an industry which most of us rely on in some way for our pensions and savings income. This book serves as a reminder that what goes up usually does come down, but in this case was aided by a culture of arrogance based on past performance and a view that rules were there to be broken.

Nicky Morgan, The Rt Hon the Baroness Morgan of Cotes

Before being forced to stop redemptions from his flagship fund, Neil Woodford was a poster-boy for U.K. fund management after evading the worst of the Dot Com bubble and the 2008 financial crash, and stood apart from others by avoiding the distractions of the City of London, says David Ricketts, author of ‘When The Fund… Read more »

David Ricketts joins the Talk Radio Europe team to discuss his new book depicting the downfall of Neil Woodford, When The Fund Stops.

Ricketts’ book ably traces Woodford’s growing confidence (and later hubris), the conflicts that began to emerge at what is now Invesco, where his interest in unquoted companies would prompt concerns, and the factors behind his downfall. He also raises some pressing issues. At one point, a source hints at the risks of fund managers focusing… Read more »

Show hosts Dan Mikulskis and Mary Spencer bring on David Ricketts onto the show to discuss his book ‘When The Fund Stops.’

Overall, When the Fund Stops is an exceptionally well researched page turner. Not only does it provide new and informative insights into the Woodford saga it should also give readers the foresight to ask more questions of their investment decisions when giving money to a lauded manager. It is essential reading for anyone who is… Read more »

From The Evidence-Based Investor:

I read the first of those books — When the Fund Stops by journalist David Ricketts — over the holiday period. It’s well worth reading, and I don’t want to give too much away about its contents. But what strikes you most is quite how far Woodford had strayed beyond his circle of competence. It… Read more »

1. Good Times, Bad Times - The young Woody
2. If it Keeps on Raining - The overnight millionaire
3. Whole Lotta Love - The star breaks free
4. Stairway to Heaven - The £5bn launch
5. Since I've Been Loving You - The loudest cheerleader
6. You Shook Me - The liquidity trap
7. Fool in the Rain - The cracks emerge
8. In My Time of Dying - The crisis hits
9. Heartbreaker - The lock in
10. No Quarter - The backlash
11. Trampled Under Foot - The 4pm sacking
12. How Many More Times - The fallout