New and Advanced Techniques for Using Point and Figure Charts 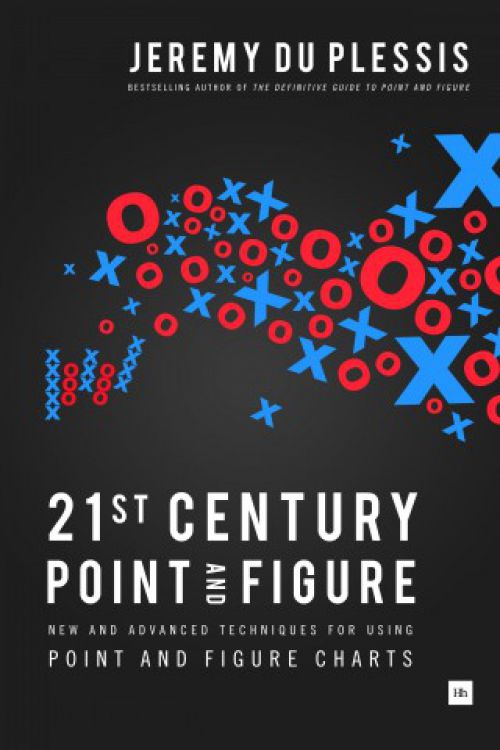 New and Advanced Techniques for Using Point and Figure Charts

Advancing Point and Figure in the 21st Century

Point and Figure has been around for over 130 years and the method is just as essential for chart analysis today as it always has been. While the basic principles of the technique have remained unchanged, those working with Point and Figure must still push the boundaries of how it is used, looking to make it even more insightful and powerful. This is exactly what Jeremy du Plessis has achieved with 21st Century Point and Figure.

Previously, it was thought that the lack of time on Point and Figure charts meant that time-based tools and indicators could not be used, and lack of volume meant that the importance of individual columns could not be determined. Jeremy du Plessis shows definitively that neither is the case and that with the use of lateral thinking there are also a host of other new techniques that can be added to Point and Figure charts and analysis.

Finally, he introduces a new Point and Figure based oscillator that can also be used on time-based charts.

All topics are illustrated with numerous high-quality, full colour charts and observations from years of trading experience.

The techniques described here open up a whole world of new and advanced analysis tools. You will see that there is more to Point and Figure than you ever imagined, and that it is more flexible than has ever been realised before. If you employ Point and Figure analysis, ensure you don’t miss out on these powerful new techniques – be sure to bring your analysis into the 21st century.

“Jeremy du Plessis’ new techniques will truly revolutionise this method of charting, dragging it kicking and screaming into the new century.”

“Jeremy du Plessis has once again taken Point and Figure charting (P&F) to a new level. He has continued from where his first book (The Definitive Guide…) left off, by showing how pretty much any technical indicator can now be plotted on a P&F chart. This ranges from oscillators, moving averages, price bands/Donchian channels, and now even volume. But with one added benefit – when these traditional indicators are combined with P&F buy/sell signals for confirmation, it increases their effectiveness, resulting in fewer false signals (whipsaws). This in itself is a huge advantage. I particularly like his new breadth indicators that are unique to Point and Figure, which now further increase the effectiveness of P&F charts. Mr du Plessis has taken Point & Figure from a well-respected method of charting prices, and turned it into stand-alone branch of technical analysis.”

“Mr du Plessis has taken traditional Point and Figure charts and successfully integrated key momentum indicators, volume and other commonly used tools, bringing Point and Figure analysis into the 21st century. As a market technician who has used Point and Figure for 20 years, I strongly believe that there is no better time to educate yourself on these updated approaches, first to better navigate the ‘noise’ that is bound to persist in all types of markets, and second to be able to effectively expand your horizons of market observation across the globe. With such high reliability, and a uniquely objective and quantifiable nature, there is no charting technique like Point and Figure, and this book can guide you to mastery of it.”

“Du Plessis brings Point and Figure into the modern era with new insights and innovation to enhance this time-proven technique. This work is invaluable to the serious chartist and highly recommended for the professional tasked with forecasting price targets or establishing risk management strategy. It pushes the envelope for Point and Figure enthusiasts to help them use their skill in new ways.”

– Axel Rudolph, Chairman of the Society of Technical Analysts

“Once again Jeremy du Plessis has pushed the boundaries of Point and Figure charting by applying moving averages and Bollinger Bands in unique ways to the chart. His application of time based indicators makes the Point and Figure chart even more relevant to today’s traders and investors.”

“This book provides a number of new tools for P&F analysts and truly does bring this technique into the modern era.”

“Jeremy Du Plessis is probably the leading expert on Point and Figure charts. His earlier book, ‘The Definitive Guide to Point and Figure’, is the premier resource for anyone wishing to learn about this underused charting technique…As with the earlier book the text and charts are immaculately presented with numerous examples across all asset classes. They also benefit from Du Plessis’s clear and unfussy style in explaining the various techniques and trade set-ups. This is a publication of real value and should be required reading for all technical traders, investors and analysts who are serious about expanding their understanding of technical analysis.”

Plessis previously authored The Definitive Guide to Point and Figure Charts which is a 514-page comprehensive review of the subject matter. This book adds a handful of technical indicators to the charts which use vertical columns of x?s and o?s to plot changes in price while ignoring time. Although the author provides a five page… Read more »

Point and Figure (P&F) is one of the oldest tools of technical analysis. It?s been used since at least the 1880s yet the technique works just as well today as it did 130 years ago. The basics of P&F haven?t changed over time but computers and software have allowed skilled analysts to derive more information… Read more »

From The Technical Analyst:

From the author of The De- finitive Guide To Point And Figure, this book seeks to bring point & figure chart- ing into the modern age. Point & figure has been around for more than 130 years; while the basic principles of the technique have remained unchanged, those working with point & figure can try… Read more »

About the Author
Preface
Introduction
Which Instruments Work Best with Point and Figure?
Point and Figure Terminology
Structure of this Book
Technical Analysis Software and Data
Acknowledgements and Thanks

1. Quick Refresher on Point and Figure