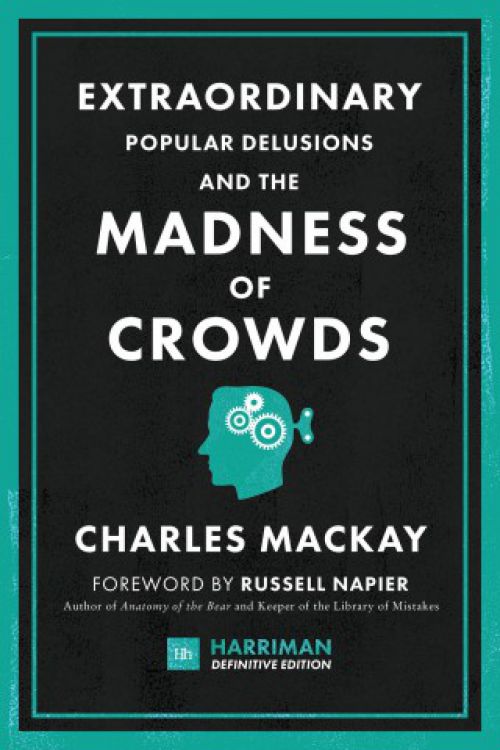 “Men, it has been well said, think in herds; it will be seen that they go mad in herds, while they only recover their senses slowly, and one by one…”

Extraordinary Popular Delusions and the Madness of Crowds is the original guide to behavioural psychology – and how manias, follies and superstitions begin, spread and (eventually) pass.

A hugely entertaining tour through financial scams and stock market bubbles, alchemical quests and prophecy wars, duelling bouts and relic hunts, the book is as insightful and memorable today as when it was first published almost 180 years ago.

This edition comes with an exclusive foreword by Russell Napier, author of Anatomy of the Bear.

Harriman Definitive Editions offer the best quality editions of the best financial books of all time. Beautifully typeset in new designs, accompanied by forewords by the best modern financial writers, printed and bound in high-quality hardcovers on acid-free paper – they are essential long-term additions to the portfolio of every investor and trader.

Charles Mackay (1814-1889) was born in Perth, Scotland, and over a prolific career in letters wrote poetry, journalism, novels, dictionaries and songs. Best-known in his lifetime for the last of these - which were set to music and became phenomenally popular - he is today best remembered for his epic guide to crowd psychology, Extraordinary Popular Delusions and the Madness of Crowds, which has never been out of print since its release in 1841.
Educated in Brussels, he began his working life in France before moving to London and writing for the Sun, the Morning Chronicle and the Illustrated London News among others. He was also editor of the Glasgow Argus and Illustrated London News.

He travelled widely (including the USA during the Civil War), published prolifically, married twice, was friends with Charles Dickens and Henry Russell, and died in London.

“You might have Popular Delusions already. But it is still worth looking at the new edition if only for the warning it contains from Mr Napier.”

Next, on the subject of group think and general hysteria, your own pre-Christmas reading should include Charles MacKay’s Extraordinary Popular Delusions and the Madness of Crowds.

Listed by the Financial Times as one of the 10 best books ever written on investment, Charles Mackay’s study of how manias start, develop and eventually pass is as relevant today as it was nearly 170 years ago. In his own words, Extraordinary Popular Delusions and the Madness of Crowds is ‘a miscellany of delusions’,… Read more »

From Reading the Markets :

When Harriman House announced the publication of the “definitive edition” of Charles Mackay’s Extraordinary Popular Delusions and the Madness of Crowds, I wondered what made it stand out from all the other editions of this classic work. I don’t have the definitive answer myself, but I can say that, unlike many other versions, this one… Read more »

Good news, then, that Charles Mackay’s classic history of manias, Extraordinary Popular Delusions and the Madness of Crowds, has just been reissued. The 1841 book has its fair share of fiction in it: Mackay might have embellished his actual knowledge of the tulip mania, witchcraft and alchemy. But as stock market historian Russell Napier points… Read more »