The smart way to save money one punch at a time

By Anne Caborn and Lindsay Cook 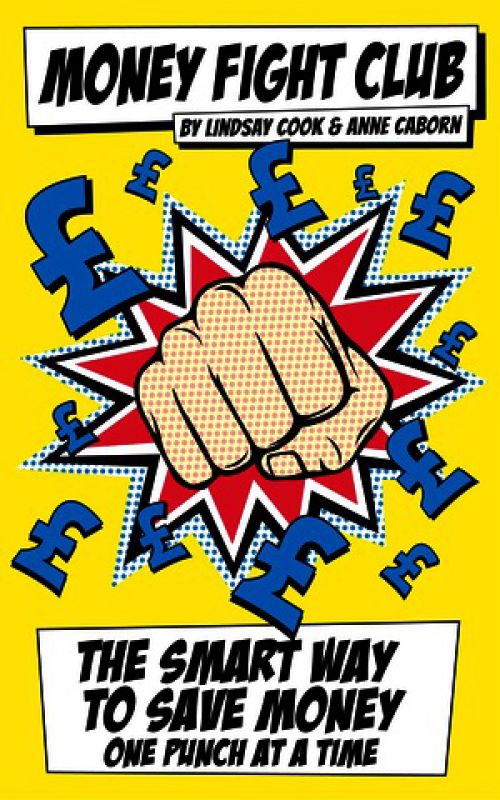 The smart way to save money one punch at a time

By Anne Caborn and Lindsay Cook

From the moment you open ‘Money Fight Club’ you will begin training for a fitter financial future. Your attitude to money and how you spend it will change forever. You’ll be shown how to take better care of your cash and make the best use of opportunities to save money.

‘Money Fight Club’ has the power to save you hundreds, if not thousands, of pounds a year on your personal and household bills. It will also put you on your guard against paying too much for life’s essentials and buying things you don’t need, or which aren’t the bargains you thought they were. ‘Money Fight Club’ gives you the moves to fight back and look after your money.

The areas of training covered include:

Authors Anne Caborn and Lindsay Cook are cage fighters of cash; martial arts masters of money. They have black belts in beating businesses into a bruised pulp of contrition, whether they’re fighting their own corners or other people’s. They will show you exactly what to watch out for and how to get even, turning the tables so you get the most for your money. They also show you how to get back your cash or seek compensation if you do get ripped off.

If you’ve been looking for guidance in organising your finances and making better use of your cash, join ‘Money Fight Club’ today.

Anne Caborn is a journalist and digital entrepreneur. Her first 'business' was selling daffodils to the neighbours in her street when she was 8 to raise money for charity.

She fights to keep hold of her hard-earned cash against all comers and punches above her weight when it comes to making sure she isn't ripped off.

Anne is co-founder of Make it and Mend it, an online sustainability website design to help people make and mend more and throw away less. She has worked as a non-executive director in the National Health Service and is currently a director of the enterprise arm of a south coast homelessness charity.

In the 1980s she compiled the first British Rich List for Money magazine. This developed her lifelong fascination with the psychology of money and what divides those who are good with it from those who are not.

Lindsay Cook has been a money martial arts expert for as long as she can remember. She bought her first home when she was just 22; having worked out it was cheaper than paying rent, and has not looked back since.

In the 90s she became the first woman Business Editor of The Times. From editorial she moved into management and discovered her ability to manage money (and spot when it wasn't being managed) gave her the skills required to control multimillion pound budgets. She became Group Managing Editor of Express Newspapers before setting up as an independent consultant helping turn round enterprises and bring spend under control for a range of companies in the UK and US. She was also Managing Director of the Specialist Markets division of UBM.

Lindsay also wrote the original “Money Diet” book in 1986, which was serialised in two national newspapers and in 2000 she produced a guide to help working mothers to return to work on their terms.

“Money Fight Club reveal the secrets of saving money one punch at a time not from special offers, promotions or voucher codes but by knowing how to complain properly.”

“Two militants in the martial arts of money have published their manifesto for extracting better value from energy companies, financial service providers and every other firm that seeks to charge more for less.”

“It’s about knowing how to complain properly – which can be just as lucrative. I am already a big fan of the website which led to the creation of this book (moneyfightclub.com) If you are the kind of person who intends to complain when you get ripped off, but never quite gets around to it, the book has helpful templates for effective complaint emails and a very useful summary of different consumer laws. Having spent the last year resolving to complain more about poor service, I have to side with the authors – financial black belts Lindsay Cook and Anne Caborn – the fight really does pay off.”

A boardroom role is valuable for executives approaching retirement … They should never forget that it is their job to hold the board to account. Lindsay Cook is co-founder of consumer website MoneyFightClub.com and co-author of “Money Fight Club: Saving Money One Punch at a Time”, published by Harriman House.

From The Financial Times:

Retirement is not what it used to be… Now, with UK life expectancy at 79 for men and 83 for women, there are no limits. We can work for as long as we like — and many of us want to do so. … Lindsay Cook is co-founder of consumer website MoneyFightClub.com and co-author of… Read more »

The dangers of contactless credit cards: Can you monitor your spending with tap and pay technology? By Lindsay Cook We are moving relentlessly towards a paperless and cashless society. This is both convenient and environmentally sound; but such frictionless spending also brings dangers. We must all become much more careful in monitoring where our money… Read more »

Wealthy people fall for financial scam Please do not take offence. You may be a consummate professional at work, but you are likely to be a bumbling amateur at home. We train for work but we assume that what happens outside the office is simply a matter of doing what comes naturally. In fact, the… Read more »

MONEY is tight for most of us these days but sometimes we make things worse by needlessly throwing away cash. Here are some of the most common ways you may be wasting money, and how to make it stretch further. THROWING IT AWAY The average household bins an unsavoury £18.57 of uneaten food every week.… Read more »

Two women, sick of the way banks, supermarkets, energy and other companies operate have written a book on how to fight back. In the book, titled Money Fight Club, ANNE CABORN, from Brighton, and LINDSAY COOK, from Haywards Heath, share some of their top tips for avoiding dubious deals, saving money and getting compensation when… Read more »

From The Soup Dragon Says:

Money Fight Club by Anne Caborn & Lindsay Cook, a great new book available now for RRP £11.99. I love any way to save money, so when I saw this book I knew I just had to share it with you. It can be tough being a parent as children cost money, any way I… Read more »

From Mail on Sunday:

It has become far harder to look after your money and find the best deals. If you want to be a money fighter and win ? rather than be a money loser ? you need to glove up. Money Fight Club author Lindsay Cook gives you some hard and fast ways to save cash smartly.… Read more »

THIS is the time of year when the nation starts belt tightening. A new book Money Fight Club gives tips to fight for the best for your finances Muhammad Ali, one of Money Fight Club?s role models, used to ?float like a butterfly and sting like a bee?. This approach holds as true for your… Read more »

We all know it’s consumer blood that’s spilt in the supermarket aisles in the grocery price wars, but we also need to be on our guard when confronted with financial products such as personal loans at the checkouts….

A Haywards Heath mother whose student son was mugged on a train has written a book based on her experiences after the event. The Middy reported back in February 2009, that Rory Wilkinson was punched and had is iphone and laptop stolen. His mother, Lindsay Cook, said “The laptop was less than two months old… Read more »

It was a pleasant surprise to be sent a new book, Money Fight Club, which promised to reveal the secrets of saving money ?one punch at a time?. This isn?t about special offers, promotions or voucher codes. It?s about knowing how to complain properly ? which can be just as lucrative.

From The Sunday Times:

Britain?s top personal finance columnist calls on readers to stand up for their rights

Why you need Money Fight Club
How the book is organised

Money management is a contact sport
Before you step into the ring
Why we're ripped off
What makes a money fighter?
The 6 Golden Rules of Money Fight Club
The Money Fight Club fitness test
Fighting styles
Your rights - adding extra punch
Why the good guy (or girl) wins

Round 2 - Household Bills
Gas and electric
Council tax
Water
Phones
Television and broadband
Household insurance
Can you handle bills like a gazillionaire?

Round 8 - Never be Blindsided
Know what you have to spend