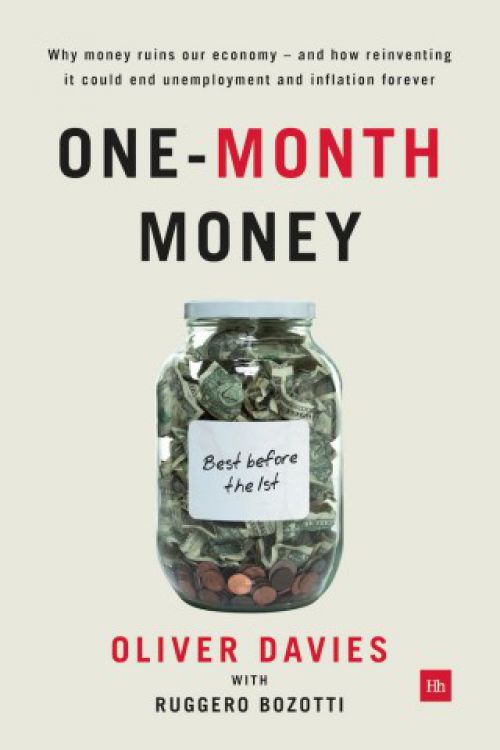 MONEY MAKES THE WORLD GO ROUND – UNTIL IT DOESN’T

Bankers blunder, governments turn a blind eye and investors just get it plain wrong. But what if there’s something else lurking behind all our great recessions and depressions, something operating in the shadows that makes our bubbles bigger and our crashes more catastrophic? Something so familiar and ubiquitous that we hardly ever think of its effects – even when it’s under our very nose.

What if it’s money?

Our modern system of money is a marvel, enabling complex trade and economic growth on a scale never known before. But money also carries a fatal flaw: it can be hoarded forever, and whenever we hoard we depress spending and distort interest rates. The result is a dreaded sequence of boom-and-bust that we know as the business cycle, an endless swing from unemployment to inflation and back again.

But it doesn’t have to be this way.

ONE-MONTH MONEY begins as an eye-opening demonstration of how modern money is often our own worst economic enemy, and ends by proposing a controversial and innovative solution: a simple reinvention of money that would end recessions, inflation and unemployment forever. By rewiring the banking system and giving money a monthly expiry date, we can create a system of money with all its current benefits and none of its drawbacks, a system where money greases the wheels of global production without ever destabilising it.

We can still save – just not under the mattress. Bad businesses can still go bust – just without bringing the wider economy down with them. Once money cannot be hoarded and interest rates are always perfect, there will be no more business cycles. The system of one-month money automatically checks our worst hoarding impulses, allowing us to save productively, keep prices stable and enjoy permanent full employment.

With many countries struggling for growth and the stimulus toolbox growing emptier by the year, a creative rethink of our monetary system is critically urgent. ONE-MONTH MONEY is not only a timely and enjoyable addition to a vital conversation, but a book that will forever change the way you think about what’s in your wallet.

In 2007, Oliver Davies graduated from Yale University with a BA in Economics. After a brief spell as a research analyst at Orbis, a London fund manager, he founded his own asset management company, Huckleberry Investments. Since its inception in March 2011, the fund has generated annualised returns of 70%.

Ruggero Bozotti received a BA in English from Yale University and an MFA in Creative Writing from Brooklyn College. He was born in Milan, Italy and resides in New York City. He is currently working on his first novel.

What is Neutral Money?
Introduction

Part I: The Case for Change
1. The Idylls of Adam Smith
2. Money
3. Mr. Keynes
4. Central Banks and Their Limits
5. Stimulus: Miracle Cure or Faustian Bargain?
6. The Rise of Secular Stagnation