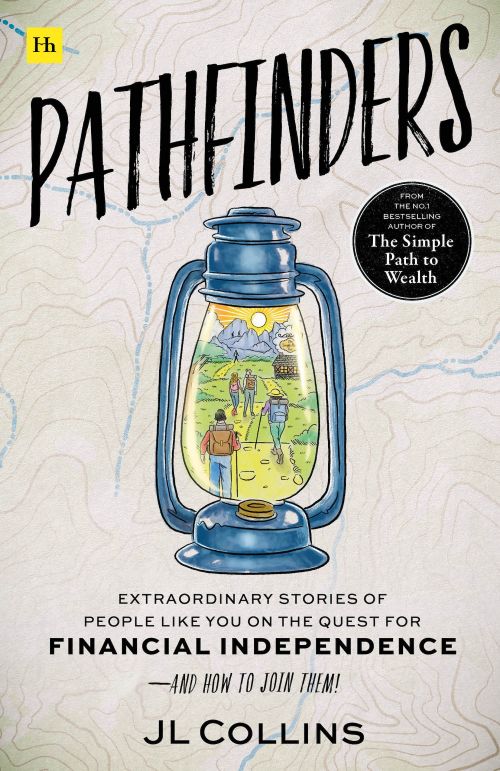 From “The Godfather of FI”, a follow-up to his international bestselling personal finance sensation The Simple Path to Wealth!

Pathfinders brings together scores of amazing and insightful real-life stories from real people on the journey to financial independence—providing practical encouragement and inspiration for anyone who wants to join them.

Lighting the way in the real world to The Simple Path to Wealth, these are fascinating, heartfelt, often surprising tales:
– of struggles overcome and the rewards that followed
– of enterprising solutions to unexpected problems
– of sacrifices made and the kindness of strangers
– of surprisingly simple steps—and the amazing places they can take you
and much, much more.

Author JL Collins accompanies these readers’ stories with reflections on his “rules for the road”—as well as a candid conversation about the journey to financial freedom with his daughter, the inspiration for his original international bestseller.

Pathfinders is the ultimate companion for your own journey to financial freedom—and the true and lasting wealth that lies at the end.

JL Collins is the international bestselling author of The Simple Path to Wealth: Your road map to financial independence and a rich, free life. He has been called “The Godfather of FI” in the financial independence community. He launched his eponymous blog, jlcollinsnh.com, in June 2011 and is the founder of the legendary Chautauqua financial independence retreats. His Talk at Google has received over 1.4 million views, and he has appeared on dozens of popular finance shows and podcasts.

His first job was selling fly-swatters door to door and picking up empty pop bottles from the side of the road for the 2-cent deposit (at the age of eight). His last was working as talk show host and magazine publisher. His work has taken him to most U.S. states as well as Canada, Germany and England. He has also travelled widely in his own time. He has been married to his wife, Jane, for 41 years.

Pathfinders is his third book.