By Lawrence A. Cunningham 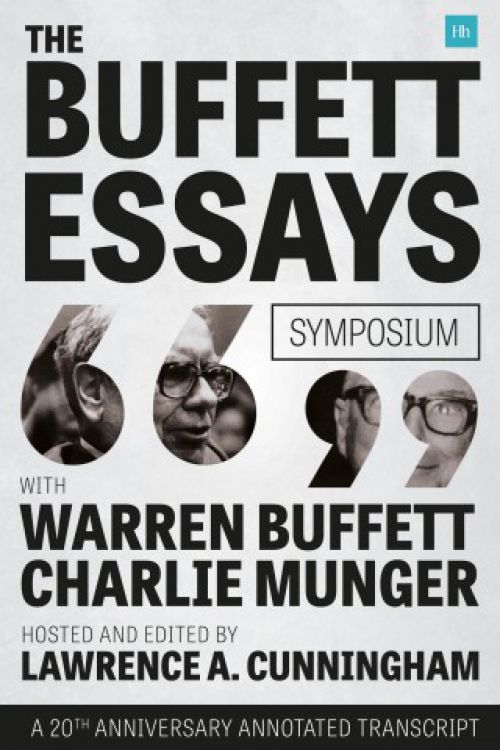 By Lawrence A. Cunningham

Among the landmark occasions in the legendary history of Berkshire Hathaway and its iconic co-leaders, Warren Buffett and Charlie Munger, was a 1996 symposium held in New York at Cardozo Law School. The focus of the symposium was Warren’s letters to Berkshire shareholders. The format was a series of panels with two dozen different experts dissecting all the ideas in the letters, about corporate governance, takeovers, investing, and accounting. Intellectual sparks illuminated the two-day affair, which drew unusual press interest for an academic convocation.

While the principal tangible result of the conference was the publication of the international best-seller, The Essays of Warren Buffett: Lessons for Corporate America, the transcript of the symposium is now being made available with annotations and updated commentary that show just how timeless the topics are and how venerable the principles Buffett laid out remain. I had the honor of hosting the event, editing The Essays, and now publishing this archival treasure, with current assessments by such luminaries as Robert Hagstrom as well as several participants from the original symposium.

Lawrence A. Cunningham is well-known to Berkshire shareholders and other followers of Warren Buffett. A business law professor and consultant based in New York City and Washington DC, his acclaimed books include The Essays of Warren Buffett, which Buffett calls the “gold standard” in books of the genre, and Berkshire Beyond Buffett, both of which Buffett has designated for sale inside the Berkshire Annual Meeting. A member of the George Washington University faculty, Cunningham is the Founding Director of GW in New York, an intensive training program for aspiring Wall Street lawyers.
A graduate of the University of Delaware and Cardozo Law School and former corporate lawyer at Cravath, Swaine & Moore, Cunningham consults on corporate governance and has served on several boards, private and public, currently including Constellation Software Inc. He also serves on the Dean’s Advisory Council of the University of Delaware College of Business and is a Trustee of the Museum of American Finance.

“The words of the master investor”

From The Rational Walk (blog):

From The Motley Fool:

Twenty years ago, a small circle of investors and academics gathered in New York to listen to Berkshire Hathaway’s Warren Buffett and Charlie Munger. Here are 12 of the best Warren Buffett quotes (plus two from Charlie!) from the transcript. Harriman House has just done Buffettologists everywhere a service, publishing an annotated transcript of a… Read more »

Twenty years ago, a young investor named Bill Ackman made an astute observation about indexation to investing legend Charlie Munger. “We’ve heard a lot of discussion about how institutions and individuals use index funds,” Ackman, then 30, said to Munger at The Buffett Essays Symposium, a conference that took place in October 1996. “But to… Read more »

Warren Buffett distills investment success into three words — “margin of safety” — and tells investors to take one of two approaches: either focus on value or buy an index fund. Buffett, the “Oracle of Omaha,” has been steadfastly giving such advice for decades, through calm and choppy markets alike. In fact, 20 years ago… Read more »

Warren Buffett spoke from the front row about director stewardship: “As a stockholder, I’m really only interested in the board accomplishing two ends. One is to get a first class manager and the second is to intervene in some way when even that first class manager will have interests that are contrary to the interests… Read more »