The End of the Everything Bubble

Why $75 trillion of investor wealth is in mortal jeopardy 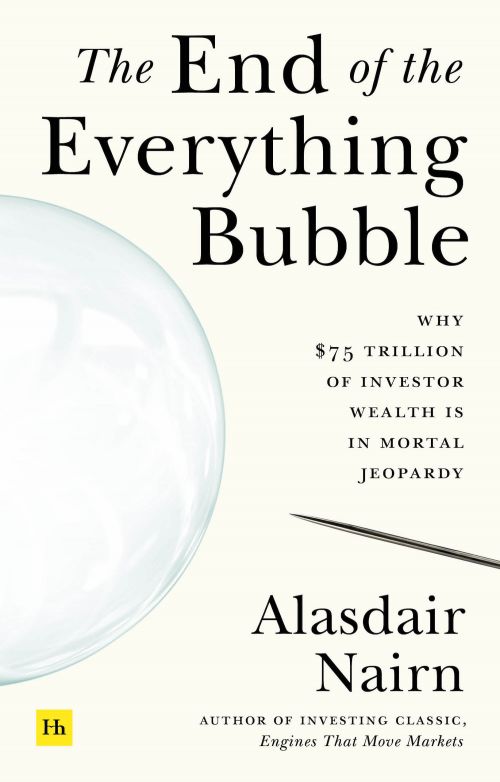 The End of the Everything Bubble

Why $75 trillion of investor wealth is in mortal jeopardy

There are crashes and then there are Crashes. But what turns an ordinary downturn into an era-defining crisis? What makes the difference between an event like the Wall Street Crash of 1929 and a brief bear market?

Historian and professional investor Alasdair Nairn predicted both the dotcom and subprime collapses, and in this compelling new book shares the evidence that we are living through such a period of deadly excess right now.

Markets appear to be going up and up, but they have got perilously ahead of themselves. Danger lies in every single investable asset class. What some have called the ‘Everything Bubble’ has inflated to unprecedented proportions.

And now the bubble is about to burst.

Nairn lays bare the level of danger with unprecedented detail and pieces together the steps that brought us to the precipice. Lastly, he points out options open to those willing to act now to avoid future harm to their wealth.

As we near the end of the Everything Bubble, don’t be one of those caught out!

Alasdair (Sandy) Nairn is one of the founders of Edinburgh Partners, an independent fund management company which was acquired by Franklin Templeton in 2018. Prior to establishing Edinburgh Partners he was chief investment officer of Scottish Widows investment Partnership, and between 1990 and 2000 was employed by Templeton Investment Management where he was executive vice president and director of global equity research.
Before joining Templeton investment Management, Sandy spent four years at Murray Johnstone as a portfolio manager and research analyst. Prior to that, he spent a year as an economist at the Scottish Development Agency. He is currently Investment Partner and CEO of Edinburgh Partners and Chairman of the Templeton Global Equity Group.

Sandy graduated from the University of Strathclyde and has a PhD in economics from the University of Strathclyde/Scottish Business School. He is an Associate of the UK Society of Investment Professionals in the UK and is a CFA charterholder with the CFA Institute in the United States. In 2020 he was elected a Fellow of the Royal Society of Edinburgh.

In 2001, he published the first edition of Engines That Move Markets, with the updated second edition being published in 2018. He has won multiple performance awards for the management of global equity portfolios over his 37-year investment career. In 2012 he co-authored the book Templeton’s Way With Money with Jonathan Davis.

Merryn talks to Sandy Nairn of Edinburgh Partners about his new book and the bursting of the “everything bubble” as liquidity drains out of the market, taking your assets with it.

While acknowledging that trying to pinpoint the cause or the timing of the downturn is virtually impossible, Nairn advises that ‘the first and most urgent requirement is to create a liquidity reserve which can be quickly deployed when there is sufficient clarity to understand what the new world will look like, and what the new… Read more »