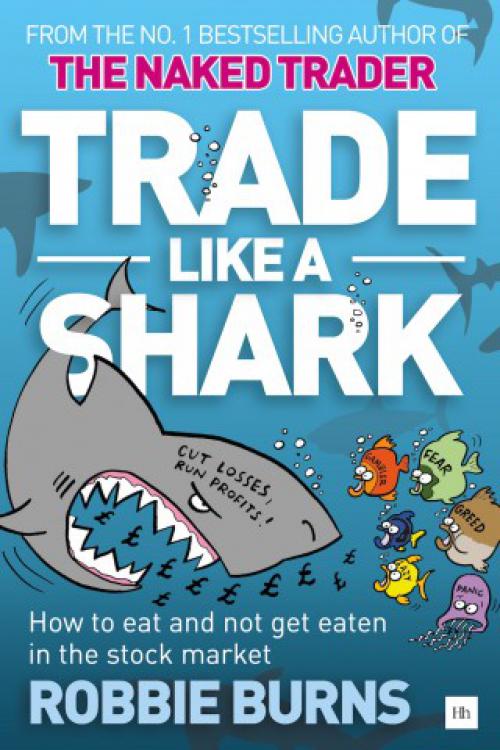 Take a bite out of the markets with the Naked Trader in his 100% all-new book about TRADING PSYCHOLOGY!

This book is for anyone who really wants to consistently make money trading shares.

Trading and investing can be tough – most fail. The human mind is to blame. It’s prone to emotion, cluttered with distractions like Twitter and social media, easily trapped by scams. But it’s possible to make money in the markets – and to do so reliably.

Robbie Burns, aka The Naked Trader, has been trading successfully from his home for 15 years – making over £2m tax-free (while eating a lot of toast and watching Game of Thrones). He’s also met and helped thousands of fellow traders at his seminars, seen every possible trading meltdown, and knows exactly what can go wrong – but also how to put it right.

In Trade Like a Shark, Robbie uses his unique firsthand experience and the real-life stories traders have shared with him to expose exactly how the human mind can play havoc with your trading. At the same time he reveals his tried-and-tested methods for overcoming it, showing how to be a shark, gobbling up money from the ‘fish’ who are full of fear, greed and other emotions. (And also why modelling yourself on Mr Spock can work wonders.)

If you’ve run into problems trading in the stock market – or just want to reinforce good habits – there is no better or wittier guide to the pitfalls that are out there, and some surprisingly effective ways to overcome them. It’s a must-read book on trading psychology – without the jargon. Read it and take your trading to the next level now!

Robbie Burns has been a journalist and writer since he graduated in journalism from Harlow College in 1981. After starting life as a reporter and editor for various local newspapers, from 1988–1992 he was editor of ITV and Channel 4’s teletext services. He also wrote ITV’s daily teletext soap opera, ‘Park Avenue’, for five years.

He then went on to freelance for various newspapers, including the Independent and the Sun, and helped set up a financial news service for CNN. In 1997, he became editor of BSkyB’s teletext services and set up their shares and finance service. While there he also set up various entertainment phone lines, including a Buffy the Vampire Slayer phone line that made him nearly £250,000.

He left full-time work in 2001 to trade as well as run a café in London, which he later sold – doubling his money on the initial purchase. While at BSkyB, Robbie broadcast a diary of his share trades, which became hugely popular. He transferred the diary to his website, www.nakedtrader.co.uk, which became one of the most-read financial websites in the UK. Between 2002 and 2005 he wrote a column for the Sunday Times, ‘My DIY Pension’, featuring share buys and sells made for his pension fund which he runs himself in a SIPP. He managed to double the money in his pension fund from £40,000 to £80,000 in under three years, as chronicled in these articles. By mid-2014 he had turned it into £350,000. Robbie now writes a weekly column for ADVFN and runs seminars using live markets to show how he trades.

Robbie has made a tax-free gain of well over £2.5 million from trading shares since 2001, becoming one of the UK’s few ISA millionaires and achieving a profit every year, even during market downturns. His public trades alone – detailed on his website – have made more than £1.5m.

He owns a house in Barnes where he lives with his wife, Elizabeth, and son Christopher. He also owns a riverside apartment on the Thames, where he sometimes works. But actually, he mainly plays pinball and table football there. His hobbies include chess, running, swimming, watching Fulham FC lose most home games, listening to terrible dance music, and trading shares from his bedroom, erm… naked. After all, he wouldn’t be seen dead in a thong… (you might catch him in Speedos at the local pool).

“Robbie Burns has done it again with Trade Like a Shark. Like all his other books it is written in the same unmistakable humorous and entertaining style. Experienced and amateur investors/traders alike will learn a lot from it and should always have it on standby in case they are tempted to make an emotion driven trading decision. Overall, a fin-tastic and jaw-some read!”

“Will likely be doing the rounds on commuter trains and among the City’s grad scheme applicants.”

“Like The Naked Trader the writing style is light, humorous and entertaining, but the subject matter is important and serious … It’s the sort of book which I will keep on the bookshelf and enjoy dipping into on a regular basis over the next few years.”

“[A] very good guide to trading psychology and could be applied to all forms of investing, not just share trading.”

Robbie Burns is the epitome of a successful trader. For over 15 years now he has been successfully playing the markets and, as a pastime, has written a number of books about his experiences. He is very well off, being part of the UK’s 250-strong list of ISA millionaires. He owns two properties outright in… Read more »

How to eat and not get eaten Bear markets are tough on everyone. Even the best traders can lose the plot. Trying to run the winners might stop working – because there are no winners. When that happens, there might only be one logical way to make money: shorting. When a shark sees the market… Read more »

About the Author
Preface
Introduction

PART I: The Way of the Shark
1. It's a Business Not a Hobby!
2. What Kind of Trader Are You?
3. Managing Your Trades
4. Trading in Down Markets
5. How the Professionals Do it