Wake Up and Sell the Coffee!

The story of Coffee Nation and how to start, build and sell a high-growth business 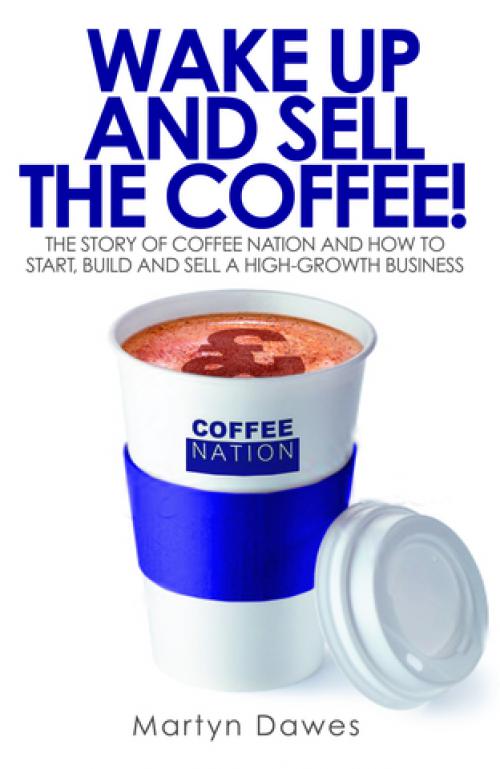 Wake Up and Sell the Coffee!

The story of Coffee Nation and how to start, build and sell a high-growth business

Martyn Dawes set out to build a high-growth business with a simple idea and the will to do whatever was required to make it a success. Twelve years later he sold this business – Coffee Nation – for Â£23m.

Along the way, among many highs and lows, there was the thrill of seeing an idea come to life, costly failed trials and false starts, countless business plans, learning how and when to raise funding, the personal journey of surviving when success seemed so distant and securing contracts with some of the biggest retailers in the world. This is the story of how a great British business was built – from a blank sheet of paper – and how it came to be one of the nation’s favourite consumer brands. It’s also a guide to help any aspiring entrepreneur put their business on the path to high growth.

Through the course of an exciting narrative, Martyn shares his experiences of growing a business and his knowledge of what you should and shouldn’t do. Mistakes to avoid are revealed just as honestly as the good decisions, making this is an unusually frank and valuable account for anyone looking to build their own business.

All areas from start-up to exit are covered, including:

Coffee Nation was based on the reliable principles of a simple idea, a compelling vision, a high-quality product and relentless enterprise. If you have the desire and vision to build your own high-growth business – or you want to read a fascinating story of how it has been done – look no further. It’s time to wake up and sell the coffee.

Martyn Dawes is a successful entrepreneur. He founded his first business, MDA (Martyn Dawes Associates) in the recession of 1991. That business continues to trade successfully to this day (now called Dawes Ryan Consulting).

His idea for Coffee Nation came from a combination of seeing how many cups of coffee were being sold in convenience stores in New York and reading about the business model of a photocopier company. Four years later, after proving the concept, he raised £4 million in development capital from a London-based private equity firm.

In 2008 the company was sold for £23m, returning investors four times their money and was sold again finally to Whitbread/Costa in 2011 for almost £60m.

“One of the most fascinating books about the coffee business.”

“Martyn Dawes’s book can only help an increasing amount of start-up companies survive and go on to become high growth companies.”

“Wake Up and Sell the Coffee is set to help more of Britain’s entrepreneurs dream big and achieve big. It’s refreshingly frank and an invaluable resource for anyone with genuine ambitions to build their own business.”

I imagine some Quality World readers wouldn?t pick up this book because they?d expect it to be lacking in quality management news. However, the truth is they?ll be missing out. Martyn Dawes, founder of Coffee Nation, transformed our daily lives with his takeaway gourmet coffee business. His story is fascinating, giving a unique perspective on… Read more »

In Wake Up and Sell the Coffee, Martyn Dawes, founder of Coffee Nation, aims to help ambitious entrepreneurs to think big and become tomorrow’s high-growth success. While Britain has a strong enterprise culture, and the number of new businesses started in the UK continues to grow year by year, the odds of survival, let alone… Read more »

When I started Coffee Nation I thought I had found an idea that was good to run with – simple to operate takeaway coffee dispensers installed in newsagents and convenience stores across the UK. A similar offer already existed in the US and what works there usually comes here. Also, coffee shops were just starting… Read more »

Why is it some entrepreneurs find it so hard to ask for help? Entrepreneur Martyn Dawes shares how mentors played an integral part in his success The idea of a coach or mentor may seem at odds with what it is supposed to mean to start your own business. There has to be a sense… Read more »

From The Irish Times:

Here, Dawes charts the story of how he built Coffee Nation from an initial £50,000 personal investment into a business that he sold for £23 million 12 years later. The story starts with him pounding the pavements of south London to get independent retailers to buy into his vision of convenience coffee. Dawes clearly had… Read more »

One of the most fascinating books about the coffee business has appeared ? it is the story of Coffee Nation, the pioneer of self-serve real-coffee machines in service areas and other high-footfall spots. This concept went from a couple of corner shops to a business which was sold for £23 million… and then sold on… Read more »

Real Business catches up with Martyn Dawes to discuss how he built Coffee Nation before selling it for £23m in less than 10 years. Martyn Dawes admits that when he founded Coffee Nation he wasn?t quite on the right track. Having identified a gap in the market between instant coffee out of a jar and… Read more »

This was on my holiday reading list as I headed to South Africa, along with the latest William Boyd novel. A real case of Yin and Yang. Wake Up and Sell the Coffee! is the story of Coffee Nation, the self-service coffee company that grew up serving decent coffee in petrol forecourts. It is better… Read more »

There are hundreds of start-ups and small businesses looking to be the next big thing. Coffee Nation was one of the few coffee success stories despite the huge growth in coffee consumption in the UK over the last 15 years. How did they do it? Founder of Coffee Nation and author of Wake Up And… Read more »

Ireland has a strong enterprise culture and the number of new businesses started here continues to grow year- by-year. Nonetheless, the odds of survival let alone growth are not high. A new book, Wake Up and Sell The Coffee, has been released to help ambitious entrepreneurs think big and become tomorrow’s high growth successes. Author… Read more »

Acknowledgements
About the author
Introduction