The War Against Cash 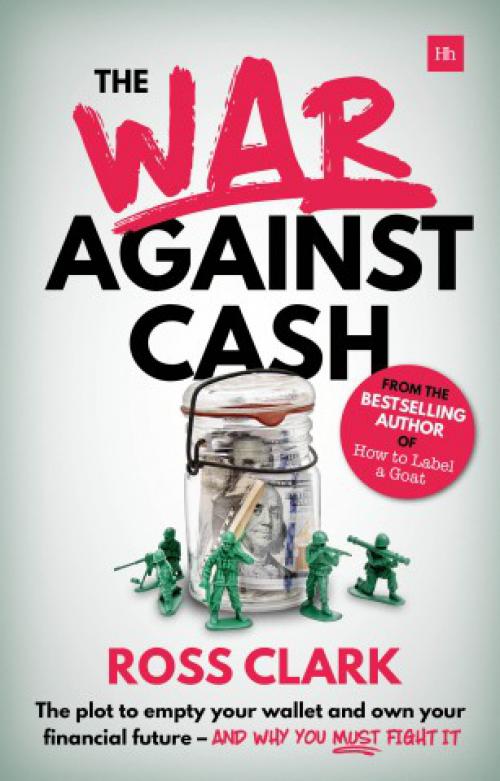 The War Against Cash

We are constantly being told that we are on the cusp of a cashless society. The financial services industry would certainly like to see it that way. We are being enticed with contactless cards, mobile phone payment apps, and methods of bank transfer: all, apparently, for our convenience.

But as Ross Clark argues in this compelling new book, it is not in our interests to surrender the right to use cash. Commercial interests want us to pay electronically in order to collect valuable data on our spending habits, while governments would love us to move to cashless payments in order to control the economy in ways which suit them, not us.

If we choose to pay electronically, that is one thing, but we will regret it if we do not defend the right to pay with cash.

Ross Clark is a journalist who writes extensively for the Spectator, the Daily Mail, the Daily Express and for many other publications. For many years he wrote the Thunderer column on the Times.
Ross is also the bestselling author of How to Label a Goat: The silly rules and regulations that are strangling Britain, The Road to Southend Pier: One man's struggle against the surveillance society, A Broom Cupboard of One's Own: The housing crisis and how to solve it, and The Great Before, a satire on the anti-globalisation movement.

Mr Clark’s interpretation, if enough people pick up on it, might just stop the world being changed for very much the worse.

The message and the takeaway [in The War Against Cash] for programmers, arguably, is… think just a little more about the extreme long term effects of creating a networked IT framework that completely digitises our world, because some of the consequences may end up on our own doorstep.

So, if we can be persuaded to think that cash is spreading coronavirus, someone’s going to be coining it in. Never mind the poor, the 10 percent of the population who don’t have a bank account, the elderly who find it difficult to use smartphones and so on — let’s frighten the world that cash… Read more »

Drive cash out of the economy and it will be a feast day for some. It is time the government spotted what is happening and put outa universal service obligation on the banks to provide us with free access to our cash.

In Sweden, where 81% of all payments are digital, VAT receipts are up 30% in five years. But, says Ross Clark, author of The War Against Cash, that argument is just another bogus way in which cashless is presented – by banks and governments, but also by Mastercard, Visa and others chasing a fees bonanza… Read more »

The fight against cash money is quite bizarre – Ross Clark shows just how bizarre. He is an extremely successful journalist in Great Britain who has made nonsense of many modern myths in different books. His bestseller ‘How to Label a Goat’ reveals some of the preposterous legal requirements of Great Britain in plain language.… Read more »

… The huge lobbying operation to create a cashless society – David Cameron considered announcing that Britain would become a cashless society by 2020 – is heavily inspired by the desire to make money from data on our shopping habits. At present, nearly half of all purchases are still made with cash, which creates no… Read more »

“It is inevitable, in the Middle East as in the rest of the world, that consumers will gravitate towards cashless payment systems where they find them more convenient and are happy that they are secure. There is nothing wrong with that. But for a society go the full way and remove the option of paying… Read more »

Mr Clark’s impeccably-referenced 177-page work took me a weekend and was worth every minute invested. … Mr Clark’s interpretation, if enough people pick up on it, might just stop the world being changed for very much the worse.

Book of the week Governments and experts keep telling us that the future is cashless. But would doing away with physical money really make our lives easier? Or is it intended to help firms and governments stick us with transaction fees, monitor our spending habits and even raid our savings in the event of another… Read more »

Warren Buffett, ESG and the end of cash: This year’s best Xmas reads Lawrence Gosling’s top financial books Stuck on what to buy the financial services professional in your life for Christmas? How about an investment book? Lawrence Gosling picks out his favourites from the titles that have hit our desks this year. … One… Read more »

This one is punchy, well-argued and thought provoking, and if Christmas makes you angry about the amount of money spent – a lot of it cashless – then this is the book for you.

Abolishing rail tickets is a typical example of what the Government calls its “digital first” strategy. It wants us to do everything online, all the time, not because it is always more convenient for us but because it makes Ministers feel they are being modern and because it makes money for the many technology firms… Read more »

Politicians want to move us towards a cashless world. It would be a disaster Abolishing hard currency would disadvantage the poor and jeopardise the economy … It would take a little longer for the public to realise the underlying reason why governments and central bankers are so keen on a cashless economy — so that,… Read more »

Ross Clark, author of the polemical The War Against Cash, makes the opposite case, arguing that one day we will regret surrendering the right to pay cash. Loss of privacy and choice, the risk of fraud or a disruptive IT blow-up and the danger of allowing ourselves to be intruded on and manipulated are all… Read more »

Adrian Chiles remarked “Ross, it’s good to have you on the programme. I’m a keen admirer of your work…”

During the lively interview, Ross Clark was asked to read the opening page from his book whilst on air.

The cynical conspiracy to stop us using cash: Ross Clark says the push for a cashless society is all about greed

Going cashless is indeed convenient – but it is for the convenience and profit of faceless corporations and the tech giants. A ‘cashless society’ might sound modern and efficient but we will live to regret it if we allow government and big business between them to abolish the option of paying in cash. Read full… Read more »

Clark argues that we should cling dearly to our notes and coins and protest loudly whenever anyone tries to stop us using them. “We will regret it if we do not,” he says. “We should boycott businesses that try to ban cash and only accept electronic methods of payment. We should run up bills with… Read more »

About the Author
1. My Little Car Park Problem
2. When Cash Stops Flowing
3. A Matter of Choice
4. The Cashless Nightmare
5. Crime
6. The Big Guys
7. Who Would Trust a Bank?
8. Tax Evasion
9. Dependency
10. The Negative Interest Rate Trap
11. Snooping On Our Shopping Habits
12. Finding Guinea Pigs in the Developing World
13. Cashless and Unfree
14. What Would a Cashless Society Really Look Like?
Conclusion